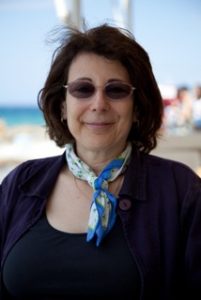 The airport monitor indicates George’s flight is on time and I think about what I’ll say to welcome him home. Love isn’t the first word to come to mind, which is, I suppose, progress. (“Salt and Blue” 11)

I rarely pull my opening block quotes from the first story in a collection and have never, I believe, used the first two sentences. And yet, this has to be my choice for my review of Lisa C. Taylor’s IMPOSSIBLY SMALL SPACES: Carol’s reflection on progress—her emotional rehab from love to . . . something else—hands over what this reader takes to be the intent of this collection: to show the fractures—fresh and healed over—that permeate modern day relationships.

This story—like the sixteen that follow—is full of damage, but the plot holds space for the protagonist’s healing. George (now dead in a plane crash) chose lover Damien over Carol. Carol is Errol’s consolation prize given that his love, Adira, has perished in the crash with George. Throughout the story (and maybe her life) Carol is passive, accepting of George’s desertion and her role as Adira’s poor substitute. In her dreams, she risks an examination of her broken emotional state and reports that “[n]one of the wounds were deep enough to cause anything but superficial bleeding” (16). Carol does not allow life to cut her deep enough to hurt; she loves on a “superficial” level, never openly voicing what she wants or needs but instead accepting what is handed to her. On waking, she risks inviting Errol into her life by sharing her dreams with him, presenting them as if they are “a secret passageway discovered in a house we buy together” (18). Eventually, she realizes that life and love with Errol—who still grieves for Adira—will occupy too small and limited “a passageway” and she leaves, but even in the leaving, her sense of herself “coming back into focus” is ignited by Errol kissing her (19). There is a suggestion perhaps that Carol may limp through relationships for some time before finding herself and her stride.

“Salt and Blue” looks at what happens in relationships of choice. As I turned to the stories that followed, I expected more of the same: after all, love embedded in life and honed by circumstance is a subject rich enough to support a library of short stories. But that was not where this collection headed. It sticks with love but digs deep into all its various hiding places. One of the spaces explored is that of sibling relationships. In “Baby Angel,” an adopted daughter is returned to an orphanage upon the arrival of a blood son. In “Suddenly I don’t,” Lenny persuades his sister to try online dating in order to secure a partner for his wedding. In “The Price,” Gene and Phoebe argue (without disclosing too much of themselves ) about financing their mother’s extended stay at an expensive home for dementia patients (“My brother and I have rules about what we’ll share which is why I never told him what I did” 93). Hannah’s mother’s death (“Natural Causes”) stirs up feelings of inadequacy with its roots in childhood. (“Her baby brother drowned in a pond at the back of their house. Someone was supposed to be watching him . . . . It was a shallow pond but he was a small brother” 69.)

The stories within IMPOSSIBLY SMALL SPACES are love stories; not the kind of love stories we see in modern day romantic comedies, but the meatier, more visceral variety. Their characters are our families, our (blood) brothers and (adoptive) sisters, the aunts and uncles we don’t see any more/see too much of, the mother we wish were alive/present/different, the father we adore/detest/fear. I think that is their magic: we can find ourselves—or elements of ourselves—in most of these stories and Taylor’s ability to contain solid truth in fiction allows us to consider a myriad of our own possible endings.

Bunny Goodjohn, Associate Dean at Randolph College in Lynchburg, is published in both prose and poetry. Her work has appeared in a number of literary journals including Connecticut Review, Zone 3, The Texas Review, and The Cortland Review and has won several prizes including The Edwin Markham Prize for Poetry in 2011 and The Liam Rector First Book Prize for Poetry in 2014. Her second novel, The Beginning Things (Underground Voices, CA) was published in November 2015. Her poetry collection Bone Song (Briery Creek Press, VA) launched in spring 2015. Permanent Press, NY, released her first novel, Sticklebacks and Snow Globes in 2007.