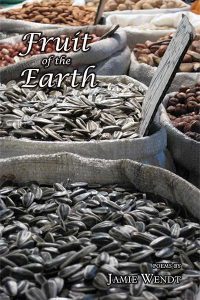 In this powerful and exquisite collection of poems, Jamie Wendt, a graduate of the University of Nebraska MFA program whose poetry has been published in various literary journals including Lilith, Raleigh Review and Minerva Rising, locates the interplay between the material and spiritual inheritance of land and people through themes of place, and displacement. In poems of vivid imagery and a strong, narrative voice, her experiences and questions are lived out while allowing that there is mystery that can only be accessed by the act of choosing, and choosing again, over a lifetime. Central to all is what it means to be a people uprooted and displaced through time while having a communal and religious identity as the locus of permanence even when the search for home—for security, freedom and peace–is an ongoing struggle.

I read most of this book on an early Saturday morning in late October as news was breaking of the shooting at Tree of Life Synagogue in Pittsburgh. I have dear friends in the Jewish community there and messages sent and received reassured that they were safe but their community was devastated and this collection began to serve, then, as a prescient guide to an interrogation of our assumptions about Jewish—and American—life and ideals. As I continued to read and reflect on these poems, the thread of placement and displacement became visceral as the poems lead one to places where knots form and unravel in ways both layered and unpredictable. Words and phrases long used took on new understanding: “loss of identity” as names carried across the ocean were taken away at the very port of assumed freedom one sees that identities were not lost, they were stolen–names literally replaced with those preferred by the dominant culture. In the section entitled, “Mother of Exiles” this reality is explored most fully:

Being Jewish at the hook
of the twentieth century
was wretched refuse
homeless. Or were you

just referring to their gray sunken eyes,
the spoons they carried
to eat the earth,
to prosper and forget?

…But you were wrong
about the golden door.

Family names were altered, then forgotten
as the colossal door slammed shut
the sounds of Yiddish, of names past.
Your Mother of Exiles,

more like Rhodes or a Greek goddess
than you admit, is everything gold and calf
they were commanded not to bow down to,

standing idly by, mild eyed,
like God during a pogrom… (13)

These poems move somewhat chronologically: we see the poet as a young woman, traveling to Israel, making her own spiritual connection with land and people; moving back to the United States; to marriage and becoming a mother. The writing—vivid in its depiction of the quotidian and homey—the rituals and meaning in being an observant Jewish woman in 21st century America. The connection felt and explored with mother and grandmother as these traditions are handed on by another generation winds gently through several of the poems in the section entitled “Amma.“ Another section, “What We Call Home,” captures the thematic matrix of these poems: the displacement of people, the disruption of experience, the disconnection from Holy land and most notably in the poem, “Within Us, the Land Moves.”

We have moved so many times
since we were from somewhere
Before we made it to Israel, we lived

In Madrid, and Kiev and Odessa
and Ethiopia and Yemen and Iran and before that,
Another place where Jews were told to pack up and leave… (41)

These finely crafted and thoughtful poems are a meditation on themes essential to our understanding as we work to heal our culture and our world—to find a place for everyone on this beautiful earth amidst so much struggle and pain. By evoking essential themes of home and family and of the cost of losing touch with our places over time, they speak to courage and resilience and all that conspires against us in our attempts to maintain those connections. In the wake of a horrible tragedy in an American city—at a time when all Americans need to remember who we are, where we come from and where we want to go as a people committed to justice, freedom, and peace—this lovely book of poems is a roadmap and guide to our collective journey forward.

Michelle Wilbert is a writer, spiritual director and retired midwife. She is the music programmer for the Crazy Wisdom Bookstore and Tearoom Acoustic Music Series in Ann Arbor, Michigan, married to Ben and mother to four young adult children.