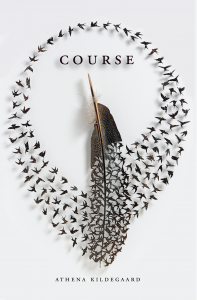 The poetry of Athena Kildegaard’s fifth book, Course, ranges from sparse to ample, vivid to subtle, and somber to lightly humorous. Leaning heavily toward the narrative, the collection’s apparent aim, to lead the reader through the underbrush of emotion inherent in human interaction and interference with the natural world, evolves into a contemplation on the life and death of the speaker’s mother.

Interspersed with haiku-inspired observations, and drawing on a river’s course as metaphor, images of life cycles and natural law collude and connect the individual poems which make up this ninety-three page book. Beginning with the collection’s premier poem, “Courses on the River,” the reader is immediately immersed into Kildegarrd’s wilderness, setting them upon on a meandering path of memory and recollection:

Teach me
to plumb your current,
teach me to surface (5)

Swift as a current, this poem leads to the next, then the next, introducing multitudes of natural citizens as well as the persistent and pervasive image of death, such as is found in “Departure:”

I smelled it first, a rot
flies delight in, a wavering
and deep-muddy smell,
for the turtle was pretty well
reduced, its eyes keyholes,
its spiny tail loosed from ruddering. (6)

These encounters, set in the Midwest, are layered into the memories of the speaker’s mother so that one moment the reader is examining a photo of the mother as a child and the next observing her smash slugs beneath her shoe as she hangs wet laundry on the clothes line. Mortality consistently peeks out from between the mundane, as in “She set the basket / down in yellow mortal grass” from “Mornings Before the Texas High-Noon Heat” (25) or

How eager she seemed,
her body a cold cage –
no place for her,
the body corruptible, as in rust,
as in the slashing of nicotine,
a desperation. (39)

from “A Story She Told Many Times.”

Poems focusing entirely on the death of the speaker’s mother reside at the collection’s third section and heart, the most stunning and moving of which is “Looking for the Particular, an Invention.”

In this poem, the speaker and her sister ritualize the bathing of their deceased mother’s body — though perhaps the speaker is only imagining this ritual, for the poet writes “Because I was not there to wash my mother’s body. // We’re going to wash our mother’s dead body,” which this reader finds a little confusing. Still, the imagery is vivid and describes the speaker’s action of drawing a cloth across the mother’s deceased body, taking “each finger, / the arthritic knuckles, abalone nails, into (her) hand.” The poem concludes with the heart wrenching “I need this holding, this bearing of weightlessness” (50).

Immediately following this tender posthumous moment, and drawing again on the river metaphor, arrives the poignant and honest “On One River We Listen to Music of Another River.” Here, the speaker and her family release the mother’s ashes into the river: “We take turns tossing your ashes with a painted cup– / purple violets, a spring flower, hardy, despite / seeming frail – though I reach in to touch your ash” (51). The artificial cup, painted with a natural image, bears the natural, yet unnatural ashes of a life and prompts the reader to experience the speaker’s urge to reach in, to try and bring those ashes back – return them to their former state.

The remaining poems in the collection contemplate survival after the death of a loved one and maintains its connection with the metaphor of the ever-changing river juxtaposed with acknowledgement of the never-wavering constancy of change.

While some of these poems are vague and a little opaque, the collection as a whole is moving and genuinely honest. If we are lucky at all in this life, our greatest honor and heaviest burden will be to bear witness to our parents’ lives and, eventually their death. Kildegaard has done so honorably here, distilling tender observations on existence and effectively bringing the reader to the surface of acceptance.

Lisa Hase-Jackson’s debut collection of poetry, Flint and Fire, chosen by Jericho Brown for the 2019 Hilary Tham Capital Collection Series, is forthcoming in March, 2019. She is the editor of Zingara Poetry review and lives in Charleston, SC where she is compiling a second book of poems and writing her memoir.