The Best Literary Writing About Mothers and Motherhood
You are at:Home»Reviews»Book Reviews»Louise Bourgeois, Midwife to the Queen of France: Diverse Observations, Translated by Stephanie O’Hara, Edited by Alison Klairmont Lingo 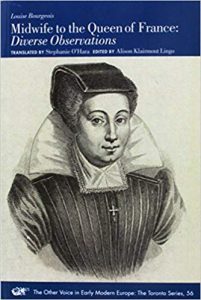 Not Your Mother’s Midwife

This skillful translation and the well-written, consciousness-expanding essays and appendices in which it is nestled, are a landmark contribution to the scholarship of early modern times. In a certain sense, Louise Bourgeois is the Boston Women’s Health Book Collective of her day; and her Observations diverses sur la stérilité, perte de fruit, et fécondité, accouchements, et maladies des femmes et enfants nouveauz nés is the Our Bodies Our Selves of 1626.The text covers a lot of ground in good, plain-spoken French — sterility, miscarriage, fertility, childbirth, hemorrhoids, the diseases of women and newborn children, case studies of various patients, the birth stories for Queen Marie’s six children, advice to her own midwife-daughter, the importance of anatomy, and a mini-autobiography.

Alison Klairmont Lingo – a historian at the University of California, Berkeley – provides the scholarly apparatus, including a must-read introduction and a handy glossary. Stephanie O’Hara – Associate Professor of French & Women’s and Gender Studies at U. Mass, Dartmouth – translates the treatise itself, which consists in its entirety of some dedicatory and encomiastic poetry, a few illustrations, and three books of 30-50 topics each, sometimes termed chapters. In Stephanie O’Hara’s translation, Bourgeois is both an engaging storyteller and a non-nonsense teacher. The volume is beautifully indexed.

Bourgeois was an experienced and licensed midwife who, by her own count, had delivered more than two thousand children (143) before she became midwife to the Queen of France, Marie de Medici, wife of King Henry IV. At that time, health was primarily understood within the Hippocratic framework as a function of four humors: blood, phlegm, yellow bile, and black bile, each of which was related to one of the four cardinal elements (air, water, fire and earth) and assigned qualities (warm/moist, cold/moist, warm/dry, cold/dry). So, when Bourgeois writes “the female sex is extremely moist and nevertheless choleric,” (104) it is something like someone nowadays saying that women have 2 x-chromosomes. Science was different then. As Lingo writes, “It is noteworthy that women’s contribution in reproduction was disputed until 1827, when the female ovum was observed and documented” (65).

The first chapter – on the question of why some women cannot conceive – is by far the longest. Here Bourgeois addresses excessively moist wombs, vaginal discharges, rigid vaginas, a back-up of blood into the breasts, obstructions in the liver, ulcers and cancers, and even, finally, at the end, in cases of what was then called “green sickness,” she prescribes a concoction consisting of a powder made from filed steel, cinnamon, aloe, and maiden-hair syrup, suitable for both men and women. In a footnote, O’Hara notes that marriage was another “favored treatment” for green sickness (111).

Chapter VII describes in astonishing detail twelve birth presentations that are difficult to handle: naval string first, arm first, shoulder first, two hands first, etc. I must confess that I read this chapter as my niece was expecting her first child, a little girl who was a little bit overdue, and – spoiler alert – turned out fine, but this chapter gripped me, terrified me, and filled me with awe for the woman who could assess these situations with her own hands and turn a child in the womb of another.

When the future Louis XIII (“Monsieur le Dauphin”) was delivered by Bourgeois, he looked very weak to her. She writes, “I said to [King Henry], ‘Sire, if it were any other child, I would put some wine in my mouth to give him, for fear that he would be overcome with weakness.’ The king put the bottle against my mouth and said to me, ‘Do as you would with any other child.’ I filled my mouth with wine and exhaled some into the child’s mouth. At that moment he recovered and tasted the wine that I had given him.” (254). Other humanizing details, such as the Queen’s fear that Bourgeois would not understand her French – Marie de Medici’s first language was Italian – brought the story alive for me.

In her “Advice to My Daughter,” Bourgeois states that “all the best things in the world come from different countries” (266). Clearly not a xenophobe. And no class snob, either, she entreats her daughter, “Even if they are the poorest people in the world, serve them with the same affection as if you were going to be well paid. And if you see there is poverty in the house, do not let yourself take single coin” (269). Her work is inspirational.

Thanks to O’Hara and Lingo for bringing it into the 21st century.

Judy Swann is the orphaned daughter of decent Midwestern people. She is a poet and essayist who publishes fairly frequently both in print and online. She has a book of poetry, Fool, forthcoming from Aldrich Press in 2019 and I am Stickman, a book of essays on the superhero Stickman, forthcoming from Young Bros in 2018.