The Best Literary Writing About Mothers and Motherhood
You are at:Home»Currents»Highlights»Announcing Myths & Ms. by Rosie Rosenzweig 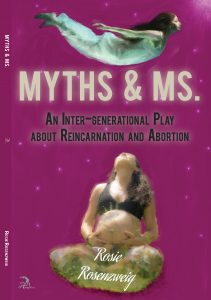 A ghost hovers watching and waiting to embody itself in the most auspicious womb. Its goal is to fulfill what it couldn’t in its last lifetime called “soul work.” Myths & Ms. is an intergenerational play about abortion and reincarnation, dramatizing the changing attitudes and conditions towards abortion in the 20th and 21st centuries. This idea of reincarnation highlights the strident voices from the pro-choice and pro-life camps.

Rosie Rosenzweig, Resident Scholar in the Brandeis University Women’s Studies Research Center, is also a Boston theatre reviewer. Her travel memoir, A Jewish Mother in Shangri-la, explores her son’s introduction to his Buddhist teachers in America, France, India and Nepal. This exploration began her studies in Buddhist and Jewish meditation. Her published articles and poems have appeared in numerous anthologies and publications about these topics and the role of women in contemporary life.

“Myths and MS. An Inter-generational Play is both timely and timeless.  It’s a current as the latest abortion debate and as old as eternal return.  This is a very, very interesting play rendered with great skill and a fine Jewish accent.” —Luke Salisbury, Author of Hollywood & Sunset and The Cleveland Indian

“In Myths and Ms.: An Inter-generational Play, Rosie Rosenzweig has given us a kaleidoscope of our present social situation. Her characters and their language is clever, mischievous, engaging, and, above all, wise.” —Rabbi Lawrence Kushner, Scholar-in-Residence at Congregation Emanu-El of San Francisco

“Rosie dives into complex cultural, moral, and spiritual topics with a loud, clear voice. Her characters are interesting and well-developed. This is an intergenerational story relevant to today’s politics of gender and a women’s right to choose.” —Martha Joy Rose, Founder of the Museum of Motherhood

“Myths and MS. is a well-paced and engaging psychological trip that will have you on the edge of your seat wondering what will happen next to this dysfunctional family. In this play, there is a cheater, a ghost, abortions, secrets, Wade vs. Wade, and a family cycle that does not end. Rosie Rosenzweig writes with such convincing dialogue, you feel so comfortable with the characters that you could be sitting their living room or kitchen partaking of their family dynamics.” —Gloria Mindock, Managing Editor, Červená Barva Press

“Myths and Ms. is a fast-paced family cycle complete with ghosts, that marries Yiddish theatre, Greek mythology, and feminism demanding the audience to question Roe vs. Wade.  Rosie Rosenzweig’s characters are unforgettable as they traverse their well-hidden secrets and open their hearts to love and loss.  They are women of action who explore their feelings in true Shakespearean fashion.   A hidden gem of a play!” —Anne Elezabeth Pluto, PhD, Professor, Artistic Director, Oxford Street Players of Lesley University.

If you are interested in staging a production or in-house reading of the play, please contact Rosie at [email protected]