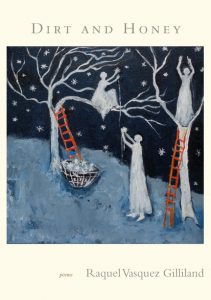 Dirt and Honey, Raquel Vasquez Gilliland’s debut poetry collection, is a celebration of women as agents of creation in Mexican culture that challenges the patriarchy and assert the power of women to conceive, create, and run wild under the moon.

A number of poems explore the theme of domestication, creating tension with the depiction of women as seductresses and warriors in other poems. “Tonight the Stars Look like Labyrinths of Quartz” is a fairy tale-like poem about a woman who climbs a magnolia to collect stars until her husband stops her. But the women in her neighborhood keep her ladder and wait “for the star mistress to come home again, / with her olive skirt flying behind her on a wicked, wild horse.“ (31)

“You Take the Garden Out For a Drink” serves the reader a lesson on desire. The garden becomes “wide and strange” as she drinks and “offers you some lore” about the first garden and the pumpkins whose desire

matched human desire
and it was this desire that made domesticity,
. . .
But something was lost in the seed-steps from wild
to domestic. Something always is. (82-85)

Gilliland frequently associates women with the moon and stars. In “Sailing for Mares,” female horses are captured, subdued with poppies, and wear lipstick, but they pine for home:

Once, we lived on ice.
Once, we wore silks made of sapphires.
Once, through masks of snow, we translated the stars. (23)

In contrast to the star-gathering wife, the garden, and the mares, who are all wistful, the women in “The Clay Temple” are angry. This poem condemns the exploitation of women and land and rewrites Genesis:

a wish for domesticated clay,
a wish for collars and rope
. . .
first sailed over, taking the clay
for their hands,
clay with mounds and holes,
caverns and mountains
and berries and honey and dirt.
. . .
And we returned that rib long ago,
Though it was never yours.
. . .
That rib came from clay. (95-96)

“Honey and Dirt” inverts the book’s title, celebrates menstruation and dirt (“Where all magic / and ritual come from”), and disputes Eve’s creation story stating “someone / got that wrong”:

“Exiles of the Wild Moon” tells the story of exiled “moonwomen,” a cross between Amazons and Sirens who “learned to sing the enemy to their deaths,” “tamed the wild horses,” and had “Gorgons hammered onto their breastplates,” before disappearing without explanation. But they left us the horse which, like women, can never be fully trusted” because “It’s / got a sliver of that wild moon left in it. And sometimes that moon / starts to sing.” (106).

There are other folk stories interspersed throughout the book. In “The Origin Story of the Child Librarian Who Broke His Vow and Released the Old Moons” the child reveals that “The gods created woman first.” (19) In “Only Mountains Steal Dreams Like That”, evolution is explained: we “crawl out of the water” to feel closer to “something as ancient as dirt and honey” (33). In “How Lines Came to Be Drawn on Human Hands”, the lotus is associated with poetry, the alphabet, and the lines on our palms (66).

Gilliland is a sorceress, alchemist, and consummate storyteller. This blend of Mexican culture and folklore speaks for, and to, every woman. Dirt and Honey will empower you, help you recall your “wild origins” (54), and heal your ancient wounds. This book is an instruction manual on how to light “your fire with a moonstruck match . . . and become whole again.” (97)

Deborah Hauser is the author of Ennui: From the Diagnostic and Statistical Field Guide of Feminine Disorders. Her poetry has appeared in Bellevue Literary Review, TAB: The Journal of Poetry & Poetics, Carve Magazine, and Antiphon.