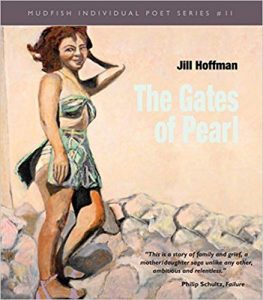 An intense love transcends most mother-daughter relationships no matter how fraught, tangled, and dynamic they may be. Jill Hoffman’s latest book, The Gates of Pearl, chronicles this intensity with heart-breaking veracity. In her preface, Hoffman—a poet, novelist, and editor—describes the book’s three elements: poems that she addresses to her mother, Pearl; journal entries written by “Pearly” that Hoffman edited; and Pearl’s voice that Hoffman captured from phone conversations. This effective layering drops readers into the psyche of Pearly, then pulls us out through the eyes of Hoffman, shuttling us back and forth on a tight line of love. She knots bits of prose and poetry so tightly that the resulting poem-plait pulses with its own thrum.

“A Fantasy Come True in 10 Years / Pearly in Starring Role,” a poem from Pearly’s Overeaters Anonymous journal, reveals many of her struggles: an eating disorder, a sexually frustrating/unloving marriage, and breast cancer. With her editor’s eyes, Hoffman elevates the material of a private writer into poetry. She crafts several zingers—declarations revealing insight—that emotionally move us with their sharp yearning: “Lo and behold, my skin fits” (32). These declarations work well because they punctuate litanies of worries, fears, desires, and dreams. Readers witness the tumult:

the many men I should have married. I will pick the most tender—
the most loving. Heads turn to see me as I pass—like they
used to. I want my house—my garden—my children happy
and nurtured. I want—I want—I want my youth back—my
health back—my mate back—Not as he was but could have been” (32).

The restoration of Pearl’s health gives readers a sense of what’s been lost. These basic human desires many of us share—or will share someday.

The telephone segments reveal Hoffman’s selection and arrangement of lines from Pearl’s verbal cornucopia, a stream of consciousness redacted and crafted. One three-page segment juxtaposes lists of food “bargains / 4 cracked squash in a new box for 20¢ / bananas were 18¢ a pound in another store” (12) with comments about pain (“bursitis arm”) and Pearl’s thoughts about writing: “I would like to write the way Grandma / Moses paints. That kind of primitive” (12). Ping-ponging from the quotitdian (laundry and dreams) to remarks about pregnancy and cancer, readers are awash with Pearl’s reality. Yet despite the two distinct voices, the book’s emotional power lies in Hoffman’s pull of Pearl’s voice through her own body—a reverse birth. It’s work Hoffman’s career has prepared her for—the astute editor combing through words for heat and beauty, the novelist attuned to story and arc, and the loving daughter seeking to make meaning from her mother’s difficult life.

And, of course, the interpretive poet who ramps experience through myth (Demeter, Venus) and metaphor. Hoffman’s voice in her “traditional poetry,” (preface) is more restrained, the desire more distant, than the voice in the other sections. Reflective in the best oblique way, she imbues imagery with emotion and composes shorter lines to move readers more slowly through the poems. My favorite of these is “Mama Pyjama,” in part because the opening stanza is such an apt and fresh take on the parent-child relationship: “You sent me out with a spoon / and your love followed me like cereal / to school” (38). The poem shifts to a more serious tone, and the juxtaposition of images suggests a disconnect between speaker and mother. It ends: “I held some helpless wool wrapped around two sticks, / married / to your heavenly flannel” (38). The yoke of the relationship is as intense as a marriage, and the power difference is implied by the surprising adjectives that ground the juxtaposition—helpless wool and heavenly flannel—the mother idealized.

Some poems in The Gates of Pearl were published by The New Yorker and the Paris Review in the 1970s, suggesting Hoffman’s early commitment to writing poems these mother-daughter poems. And although Pearl died in 1979, Hoffman writes: “Our collaboration extended from the mid-1970’s until today, March 17, 2017, her 101st birthday” (preface). I found this both excruciating and enlightening, again, giving testament to the process of such an artful and emotional project. What does a four decades-long gestation yield? A telescoping of time, a compression of grief and reflection, a gift to readers for the collaborative paths we, too, must walk.