At the end of Spielberg’s film, “A.I.,” David, the prototype robot child built with the sole purpose to love unconditionally, survives for millennia in a world ravaged by uncountable and unaccountable transformations that leave it extinct of humans. He is found submerged at the bottom of a watery world by ethereal robots endowed with goodness, who see in David the alpha point of their lineage.

When David learns that the world has been emptied of humans, he has a wish he wants his rescuers to grant him. His wish comes from the one looping emotion, or rather, directive, that had been wired into his circuitry: to have his mother, the woman who had once pushed his “on” button, brought back so that he can love her. This is, after all, what drives his “drive.”

The ethereal robots, filled with pure benevolence, it seems, want to make David happy. And with their advanced wizardry, they proceed to do so. From a strand of the mother’s hair lodged in David’s mechanical toy bear’s pouch, they recreate the house in which David, the android, came to consciousness as a child. The robots then inform him that his mother is about to wake up in this house of his electronic dreams come true.

But here is a catch to this “dream come true”: the world with the house and David’s mother in it can last only for a single day. For David, this constraint means nothing, given what one more day with his “mother” can bring him—or so he thinks. He can’t wait to see her, even though he knows that after the sun sets, she will be lost to him forever.

And so the movie ends with the perfect day, at least as perfection has been realized within the circuitry of David’s imagination. David is finally basking in his mother’s love and has her undivided attention, both of which eluded him for the better part of his previously conscious state. Mother and son play hide-and-seek and share cake, all the while reveling in all sorts of sensory delights in this house suspended in a dream. They laugh and they talk until the sun starts to set, and slowly this bubble of a world illuminated and colored by love and memory goes dark, as the mother lies down on the bed.

When “A.I.” first came out, my younger son was eleven years old. He and I were the only people in the family who liked the movie, and we watched it over and over. Ten years later I was reminded of this movie. As in the story, so in my life, the years had brought irreversible changes. The son who watched that movie with me was now a young man whose mind was submerged into the depth of mental illness.

Like David, who wanted his mother back at all cost, I wanted my son back. I wished for those benevolent androids that were almost pure light to come to his rescue, but all I had at my disposal to help him rise was a shaky trust in doctors and the array of drugs reducing the ravages of symptoms.

And like David, who had been built to imprint on the person starting up his software, I too found myself as a mother imprinted upon by my children from the moment they were born. They etched themselves into my heart, laying an intricate web of scars over the years that mapped the trajectory of joy and pain they brought. For the better part of the years since their arrival into this world, they were mostly my world. So, when my younger son turned into a stranger in front of my eyes, when the world of his fears claimed his sense and sensibility so deeply that no amount of love or reasoning could anchor him to the world I thought we shared, my world cracked, then shattered, and soon I felt drowned in doubts.

The world I had to scramble to rebuild in my head from a strand of memory was far short from the imperatives of sweetness and light of Spielberg’s imagination of love redeemed. I desperately wished, from the bottom of my imprinted heart, for the robot-like certainty of love and its purported powers to change the world.

Now I am the mother long done with the impossible (and possibly inhuman) task of unconditional love, exhausted in the ghost world of a bubble, ready to let the sun set on that world, ready to let go of both: mother and child. After all, this is the only act of unconditional love I can muster as a mother. Even if the child’s world goes suddenly dark. Because it has to: childhood comes to an end to give way to something else, whatever that maybe, a dream come true or a nightmare. And so must my story of motherhood fade with a world that can’t, and which shouldn’t be resurrected, for it can no longer be real in this world.

My son says, “I am missing my life. All this time I am doing nothing.” He looks away as he says this. I look away too. I don’t know what to say to him. We are seated at a Formica table, its surface latticed with years-old scratches that are impossible to clean. The only window in the room is narrow like a squint and too high up for me to reach to open and air out the lingering chemical pine scent of the floor cleaner.

It is true; he is missing his life. But were he not here, in this locked treatment facility, there may be no life for him to miss.

“I feel like my youth has been taken from me.”

He is twenty-two years old. If there has been a theft, it wasn’t committed by the hospitals or this facility. How do I help him see that the culprit is an invisible illness?

The meds he has been forced to take bind him to a drab coherence about his situation. The perils of his recent past before the meds have faded now, like faraway shores, barely visible. Whatever promise of something better in the future, at the moment, is just as distant and faint. That irresistible call to go anywhere and everywhere at once is now muted but not yet inaudible, still barbed with the hooks of the pleasure of adventures almost within reach. As would be disaster, should he heed that call.

What can I say to him that would be comforting to us both? What to say about his youth, a state normally replete with possibilities? Or my years of parenting, those years of always spinning hopes and plans for him and his brother. The compendium of what could be, what could have been, what should be—the weave of magical thinking from the loom of nostalgia.

It’s much easier to think of Odysseus fettered to the mast on his ship on the high seas. Of his smarts, or unbound confidence, or sheer delusion that he could cheat the shipwrecked fate of those who chose to listen to the euphonious call of the sirens. Odysseus always makes it back to Ithaca, but for my son and I, the journey is still uncharted. Week after week, the life missed comes up in our conversations. A siren song of sorts. Week after week, I try to reassure him that there is more life ahead than what was left behind. The thread of hope picked up again, re-stitched.

And so spring turns into summer, and summer moves into deeper grooves. My son humors me and tries to imagine the summers yet to come. I remember summers from years ago. The seasons when the boys were young. The balmy days in time’s hammock strung across a seeming eternity. The orchestra of birds striking up a symphony as the short nights faded into light. The hum of sprinklers, the mix of scents from flowers, some just opening, others long spent. The boxes of berries in the fridge and the peaches lined up on the windowsill. The band of the sky at dusk like a safe zone between the delights of day and the worries that come out to play only in the darkest of nights. And through it all, a rooted certainty that my sons will grow up healthy and happy, with lives like our family seemed to be living then.

I wish I could tell him that yes, we are both missing our lives. I wish he could know, the way I am learning, that the storylines of those missed lives are spun from the coarse wool of an imagination shorn from nostalgia. Our old lives are just that, old. This life here, the one before us now, within the confines of the scrubbed floor of the visiting room and its dirt-streaked table is now the adventure. Our challenge is to live beyond our dreams so that we can go on living.

April washed away
in rains that won’t quit. Hope springs
eternal, they say.

When I first heard you talk about the flood that will end the world with such conviction and the light already dead in your eyes, I cried, hoping to wash away the sorrow. For the longest time, I didn’t realize that all you want now is for us to be well. This flood, gathering such force in your mind, is this how you think we can start anew? It’s a story of hope for you, isn’t it? 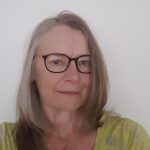 Maria M. Benet‘s work has appeared in “Poetry,” “Prairie Fire,” “Drunk Monkeys,” and elsewhere in literary magazines and online.  She is the author of a collection of poems, Mapmaker of Absences, published by Sixteen Rivers Press.