The cloud holds some amount of the sea. All of the eggs of her daughter had been cradled within her too, the mother vessel. It’s just science. In fifth grade music class she had been taught to sing: in egg shells e day o. The lesson recurs in the chamber of her mind randomly. The sea sound in the ears should you shape your empty palms around them, that sea sound swish is on its own a sign of disease: a blocked carotid artery. Across the country the cloud in her daughter’s sky with its potion of ocean, the sea they each alone know in its obscured form. Glo-o-o-o-o-O-o-o-o-o-O-o-o-o-o-O-ri-a in Ex-cel-sis De-o!

STARFLOWER [I WANT HER BACK]

Sometimes my longing [dire]is to make myself very small and very quiet. [Thus reduced] I might slip myself into her life unnoticed. The world where lives my daughter. Veined sky domed over her fiery head; mossed path underfoot, sometimes the edge of a stone turned up. [To mark time passed. Passing.] If the universe should return her to me, never another false move to drive her away again. [As long as I live.] Drawing upon the subtle power of plants to heal, I sow swaths of purple flowered borage in the garden. Ah, bee bread! [Ornamental, edible, medicinal.] All days the queens busy with the starflower. Sinuous wavy margins of the deep green leaves alternate up the stem. Hairy and rough. I would pluck and serve as a tea in her bone white china cup. Cucumber flavor, light, a delight on my girl’s tongue. [Her stilled tongue.] Each afternoon the drink. [Pliny the Elder recognized, advised. To give courage and comfort to the heart.] This self-seeder that will grow in highway ditches. Faring better in poor soils, yes. Sometimes the flowers turn from blue to pink. Some times. [Time passing.] Blooms left alone produce excellent honey. [So sweet she must be. So sweet.] 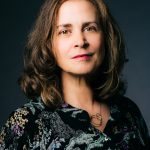 Peg Alford Pursell is the author of Show Her a Flower, A Bird, A Shadow (ELJ Editions, March 2017; Second edition: WTAW Press, September 2017), featured in Poets & Writers magazine’s second annual 5 over 50, recipient of a 2017 Eric Hoffer Award Grand Prize Honorable Mention, 2017 short list finalist for the Eric Hoffer First Horizons Prize, and short list finalist for the 2017 Indies Book of the Year in Literature as of this writing. Her next book, A GIRL GOES INTO THE FOREST, will be published by Dzanc Books in 2019. She is the founder and director of the national literary reading series, Why There Are Words (whytherearewords.com), and founder and director of WTAW Press, an independent publisher of exceptional, award-winning books. (wtawpress.org)