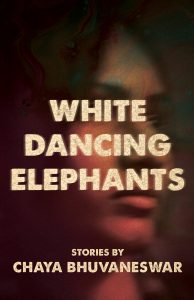 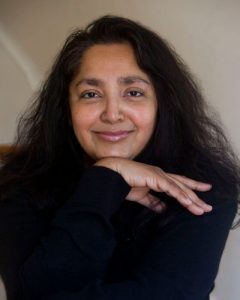 These stories are disturbing. They sizzle like hydrogen peroxide on an open wound. They unpack “Other” to a depth never explored before in the American short story (“Others,” as in what Ashis Nandy says, “What others can do to you, you can do to your own.”[1]) In Chaya Bhuvaneswar’s White Dancing Elephants, a psychiatric patient destroys her doctor, a father considers murdering his disabled daughter, a taxi-driver-turned-poet disappoints his family, and a manicurist embezzles her criminal employer’s money. And that’s not the half of it.

Vinita had spent the last past year hating herself but saying, in her mind, how much she hated everyone. It gave her flickers of amusement, sometimes, to think the words “I hate you all”…[as she]settled a stressed-out customer in the deluxe manicure chair. (146)

Others, like the late-blooming poet Millind in “The Bang Bang,” are blissfully self-centered:

They championed Millind – thin, frightened, mysteriously asexual and sage-like – whose home life no one knew or asked the details of, who existed in 1981 and beyond, as a reminder of “other voices,” “from the margins,” and all sorts of phrases and symbols that Millind himself, not through shrewdness but just luck and ignorance, succeeded brilliantly by ignoring. (100)

Marco, the man Vinita wants to save from Homeland Security, is another Oblivious, also a poet:

Despite Marco’s deadening day job as attendant for one of the Early Bird Special! parking lots on Newbury, his mind remained both starry and suggestible. He sent his poems, written in English with crucial Spanish words, the sound of which Vinita admitted she liked, to little magazines that she’d never heard of, nowhere that paid him actual money. Though he submitted poems widely, every week. (150)

Her understated tongue-in-cheeks can delight (the poet’s day job at one of the Early Bird Special! parking lots). But they can also elicit an unconscious smugness, as they do in “A Shaker Chair,” where Sylvia, an African-American victim-of-incest-turned-psychiatrist approvingly assesses her own image:

She made a point of being polished, calm, perfect. Prada bag hanging on the door of her office, delicate high-heeled shoes, silk blouse tucked inside a suit with good clean lines. Revulsion, anger, and damn it, with Maya, something else – sometimes a pause, a quick breath held, Sylvia thought, as she turned the pages of a Ralph Lauren catalogue, a favorite Gold Amex credit card between her fingers. (54)

Whenever Maya sat on one of Sylvia’s plain, gleaming, antique wooden chairs, she left behind a strangely sweaty curry smell, which Sylvia was too embarrassed about noticing to ever mention to anyone. As if it might in some way mean Sylvia, of all people, was racist, though the very thought felt bizarre in her mind, as if she were thinking like a white. (53)

Bhuvaneswar’s language is often luscious and her images arresting. “But all she’d done was lift bowls of water, the larger ones for clients having pedicures with special stone washes. One of the treatments even flecked their skin with gold.” (152)

She is a master of the twisty narrative and the unexpected reveal. Indian cultural concepts are a consistent presence in her stories: Saraswati, the Hindu goddess of knowledge, music, and art. (95). Kali, the complicated goddess of time, creation, and death (75). Ashis Nandy, one of the “most formidable and controversial intellectual[s]”[2] of our time, author of The Intimate Enemy (153).

In her depiction of transgression as a core locus of Otherness, Bhuvaneswar writes about motherhood, fidelity, class privilege, patriarchy, lesbian love, celebrity culture, and politics. We read about Rachel Ray and Jay Z (146). We get some Bobby Jindal. “Sylvia had read about the Christian-converted Indian-American Southern white man while sitting in her mother’s warm kitchen at home…” (55).

For the seventeen stories in this collection, Bhuvaneswar won the Dzanc Short Story Collection Prize. Fourteen of them were previously published in such venues as Asian American Literary Review and Michigan Quarterly Review.  All seventeen of these stories are remarkable.