The Best Literary Writing About Mothers and Motherhood
You are at:Home»Reviews»Book Reviews»Conjoining by Heidi Czerwiec 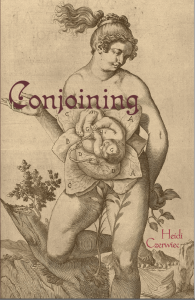 During a recent public reading, Heidi Czerwiec described the inspiration for her new poetry collection as the theory of maternal imagination—that a mother’s thoughts during pregnancy transmit to the developing fetus and result in congenital abnormality. As the mother of an adopted son, Czerwiec wondered whose imagination influenced his birth. In “Son, An Origin Story,” she claims her’s and her husband’s:

“We grew you in the blown glass
of our imagination, the way one does
an apple for a flask of Calvados,
literal distillate of our dreams” (53).

Yet she didn’t stop with her answer to that inquiry. Intrigued by the centuries-old theory, Czerwiec “fell down the rabbit hole” of research and produced Conjoining, a fascinating and frenetic collection of poems readers won’t be able to forget.

Those familiar with Czerwiec’s body of work won’t be surprised by Conjoining’s roots in history and contemporary culture. The subjects of her books range widely, from Utah’s ancient Canyonlands (Hiking the Maze, Finishing Line Press 2009) to the North Dakota oil boom (Sweet/Crude: A Bakken Boom Cycle, Gazing Grain Press 2016) and pop culture icon Bettie Page (Self-Portrait as Bettie Page, Barefoot Muse Press 2013). She explodes the maxim “write what you know,” combining research, a keen sense of empathy, and an expansive imagination to inhabit the interior lives of figures we know little about. In “Doggerel,” for example, she gives “dog girl” a voice, and she celebrates the beauty of her body, her hair:

The intimate space Czerwiec creates in the poem gives us a glimpse into this woman’s probable thoughts—stories that speak back against the dominant attitudes of the day.

I favor the poems where Czerwiec takes up mothers and mother-figures as subjects or speakers, such as “The Girl Who Gave Birth to Rabbits” and “Woman Has Phantom Pregnancy, with Quintuplets. “Blue Boy,” in particular, continues to haunt me. A postmortem photograph from 1930 inspired Czerwiec to imagine the mother’s feelings when she sees her stillborn child:

“Still, without mercy
my hard breasts wept when out they filed
carrying his casket small and white
as a wedding cake” (24).

Czerwiec’s ability to zoom in on the most revealing details of a snapshot or scene etch her poems into memory.

Despite the gravity of her subject matter (she even tackles the actual causes of congenital abnormalities, such as nuclear radiation), Czerwiec’s verse is clever. Her facility with form and sound injects poems with playfulness. The opening three lines of “Binomial Nomenclature” creates a sentence that twists in sound and meaning multiple times: “Humankind’s uncomfortable with ambiguity— / it wants us fixed upon a pin, affixed, / splayed, displayed by naming” (3). Just as Czerwiec argues that we’re uncomfortable with ambiguity, my tongue’s uncomfortable with the concentrated turns, the fix/affixed that picks up the short “i” sound and the splayed/displayed that picks up the long “a” sound. This sonic soundscape, introduced in the very first poem, forms the bedrock of the entire collection. Even the abecedarian-derived sequence, “A is For A-Ké, the Chinese Monster, and the Tragedy of P, His Parasitic Twin” is composed in mesmerizing forms. Czerwiec invents a life for A-Ké set against the backdrop of Canton during the opium wars, a world she evokes in distilled slips of poems—poems constrained by form just as the lives of A-Ké and P are constrained by their physicality. And she creates an identity for P, an independence where he splits from his brother and roams Canton. This narrative, spread out in sections throughout the collection, deepen the themes of bodies transformed, joined, and changed by genetic mutations or congenital abnormalities. They deepen our sense of stories not fully told and lives represented by fragments.

I echo the poets who praise Czerwiec’s work as “smart, sexy, and ever so relevant” (Moira Egan), as “lush [and]language driven” (Amber Sparks), and as “original, fresh, intelligent, and worthy” (Betty Adcock). Conjoining is a great book for anyone who appreciates poetry, and the collection will leave readers interested in parent-related poems with an appreciation of motherhood experiences usually left in the margins.