The Best Literary Writing About Mothers and Motherhood
You are at:Home»MER VOX»Poetry»Kirun Kapur – Body Image

Then, through the window,
I could just make out a cormorant
immobile on a buoy, head high,
wings fully open, a totem,
black mark against morning.
I was about to turn away when it shifted,
twisting, slipping into the water,
first otter, then eel— a moment later
I could have sworn a girl with dark hair
surfaced. No time to blink
and the bird was back, swallowing prey,
lifting its head, pressing wings to the sun.
I watched to be sure it was real, a bird
who can escape—change shape after shape—
who can become a girl eating a river.
I’ve been two selves, at least,
two creatures, each hungry, each trying
to slip away. Bad-luck bird, snake,
girl—Can the sun burn out
of my chest what chases me? 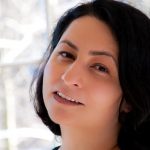 Kirun Kapur is the winner of the Arts & Letters Rumi Prize in Poetry and the Antivenom Poetry Award for her first book, Visiting Indira Gandhi’s Palmist (Elixir Press, 2015). Her work has appeared in AGNI, Poetry International, FIELD, Prairie Schooner and many other journals. She has taught creative writing at Boston University, Brandeis University and is currently a visiting writer at Amherst College. Kapur has been awarded fellowships from The Fine Arts Work Center in Provincetown, Vermont Studio Center and MacDowell Colony. She is the director of the New England arts program, The Tannery Series, and serves as Poetry Editor at The Drum Literary Magazine. She was recently named an “Asian-American poet to watch” by NBC news. Kapur grew up in Honolulu and now lives north of Boston.