I come from unreliable narrators. I come from my birthmother’s womb. I was next to her heart for nine months. And then I wasn’t. Who she was—Unkown. I was born in Korea—South or North—most likely South. But the exact place—Unknown. My abandonment story—a policeman found me on the firehouse steps and brought me to the closest orphanage. My adoptive mother, a strong independent white woman who chose not to marry—she liked to say I came from a 747 that carried me to the Philly airport in December of 1979. So with this birth story logic—I come from metal. From shaky steps. From the air.

From the moment my feet touched New Jersey soil, my mother claimed me as her daughter. This eraser of my birthmother left no room for mourning. As a three-year-old newborn, I could say Uma-Mom in Korean and nay-yes. But when learning the English language—America, there were no words for grief. Later I’d learn, adoptees suffer a primal wound—being ripped from their birthmother. And if not dealt with, that kind of silent pain stays in the body. Becomes cancerous. Not benign. And metastizes.

In July of 2004, while visiting my Mom in Florida, where she’d happily retired from forty years of being a NJ State Librarian, she reluctantly admitted she knew the cause of her back pain. A pain so strong she couldn’t lie down in bed. It was that darn cancer. Again. Apparently she had breast cancer in November of 2001. A lumpectomy, in and out of the hospital in a day. She saw no point in telling me, what with Thanksgiving and Christmas coming and all. Actually, she told no one—embracing the Librarian’s motto, Silence is Golden. That summer, I stayed and took care of her. As if I could order the cancer to stand down. My seasonal job, working at the Asian American Film Festival in San Francisco, allowed for the time off. But nine months later, when she died, I still hadn’t learned the language of grief.

Instinctively, I went into survival mode. To not drown in the victimhood of it all. I did what my mom taught me. When in times of great emotional distress—do a task. Be useful. Be busy. Move until you can’t feel. When her retired friends blanketed me with sympathy—I shrugged them away. I was fine. “How are you feeling?” What feeling? I had things to do. I created multiple to do lists.

What I knew for sure, there was no room for crying. Partly because my mother hated crying. And I remembered a college friend saying, when her Mom died from Ovarian cancer, she was afraid to start crying. Because if she did, she thought she would never stop. So when it was my turn. When my worst childhood nightmare happened—I too would not become a useless puddle of mess.

But you can only hold that kind of grief in for so long. As 40 approached—the gurgling of wanting a child, of giving birth, of going through pregnancy, of having blood and cells and heart and linage come from me—grew louder. I needed something to come from me. And not just be air.

When Emmy Vianne Chau was born in August of 2016, I had no idea that going from my mother’s daughter to now my daughter’s mother. That flip of the coin, would rewire me. Connecting my heart back to my mind. And now I felt all of the grief, my ghost birthmother, my lost newborn years, not speaking my emotional truth. Not being allowed to cry. Encased and sealed in tomb of silence.

But the flip side of loss, of being lost, is acceptance. I come from the land of not enough. From shame and unknowns. But my daughter will come from full disclosure. She will never have to worry about unreliable narrators. She’ll know her birth story until she’s ready to narrate her own. She will be allowed all feelings (negative and positive) to be spoken. Processed. And then let go. 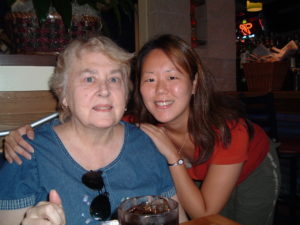 Lynne with her Mother Vianne Connor 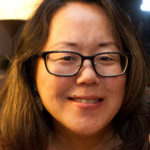