The Best Literary Writing About Mothers and Motherhood
You are at:Home»Features»Special»M.A.M.A. Issue 25: Anna Hughes and Elise Gregory 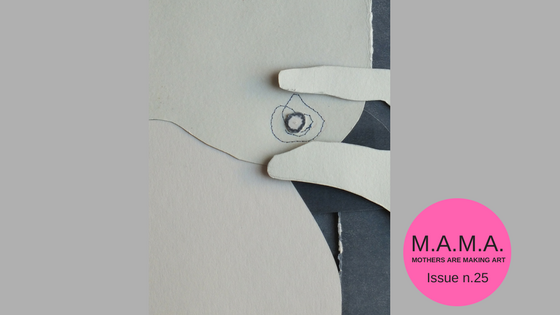 The ProCreate Project, the Museum of Motherhood and the Mom Egg Review are pleased to announce the 25th edition of  this scholarly discourse intersects with the artistic to explore the wonder and the challenges of motherhood. Using words and art to connect new pathways between the academic, the para-academic, the digital, and the real, as well as the everyday: wherever you live, work, and play, the Art of Motherhood is made manifest. #JoinMAMA

This stop-motion animation, made from collaged monoprints

The work focusses on the loss of self-identity in early motherhood. What is left of a person’s personality once the numerous responsibilities and anxieties are taken on.

Anna Fennel Hughes is a freelance artist creating monoprints that are often used to form illustrations, animations and textiles. She works from her small printmaking studio in northern Italy, but studied and graduated with first class honours from Duncan of Jordanstone, Scotland.

The Riddle was one of the selected work part of Left Overs 2017.

can’t be taken with small ones.
Times are set for such things: bed,
naps, or best “quiet time.”

Before dredging internal lakes,
the child must be watered and set out
or fought into bed.

Moms must wonder if
a brick wall may be more swift—
a long-term vacation.

Though a concussion makes for poor
interiors, chances are your mate
feeds the babes while you sleep
for a month.

I’ve wondered where all the titles,
and two-cent words have gone.

Say I was given a weekend with hiking
boots and head lamp. Perhaps I could find
my misbegotten learning.

The problem remains: I have no
maps and little training—the trail littered
with roots and misplaced anger.

Maybe rethink the bikini….
Slip in the revolver. Call what my mind game is—
an internal bear hunt.

Elise Gregory tends gardens, sheep, goats, chickens, three human children, and one spouse. Her poems have appeared in Stoneboat, Rock & Sling, Sweet: A Literary Confection, Cider Press Review, Women Arts Quarterly and elsewhere. Her second chapbook is forthcoming from dancing girl press. All We Can Hold: Poems of Motherhood, which she co-edited with Emily Gwinn was published by Sage Hill Press in 2016. www.allwecanhold.com