The Best Literary Writing About Mothers and Motherhood
You are at:Home»Reviews»Book Reviews»Prisms Particles, and Refractions by Carol Smallwood 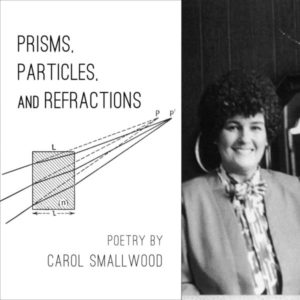 Carol Smallwood’s new collection, Prisms Particles, and Refractions, is at once playful and serious. Her work in this volume ranges from extremely concise poems such as “On Days of Slow Rain” where the speaker becomes “a child again / longing to read / darkened tree bark/like Braille” (53) to the four-page oeuvre written in journal form, “A Late Summer Diary.” The fact that these two poems are neighbors makes the transition between short and long more emphatic, and creates echoes and resonances.

As Smallwood deftly moves through a variety of content and subject matter, the reader gets a sense of an unpredictable world, despite the anchor of a wealth of scientific evidence to the contrary. Facts are posited, yet not accepted as givens. For instance, in “We See,” the persona examines exactly how we do see and absorb light, and questions knowledge imparted during college years. Here, the title becomes the first line: “We See / with rods and cones I learned / in college—it may not be true/today…” (13). As this poem deepens, mirrors, faces, and sacrifice come into play, as well as the automatic adjustment made by the retina from upside down to right side up. This piece is emblematic of Smallwood’s gift—focused examinations that lead to “aha” moments for both writer and reader.

The poems in this book have been published in many journals. Clearly the art of poetry is one Ms. Smallwood has lived and learned. Her forms range from cinquain to villanelle to sestina; she switches from formal to free verse with ease. The myriad references and allusions in these poems draw from philosophy, psychology, physics, metaphysics, history, and literature.

“A Prufrock Measurement” (74) employs playfulness and formal rhyme in order to merge two vastly different subjects—contemporary fast food proliferation with the persona of Eliot’s Prufrock. This willingness to draw from disparate sources creates a prismatic effect: varied and brilliant. In the introduction, Smallwood states her intention to present poems “aimed at capturing…aspects of light…and light as metaphor.” It is this reviewer’s sense that she has succeeded.

Judith Skillman’s recent book is Kafka’s Shadow, Deerbrook Editions. Her work has appeared in LitMag, Shenandoah, Zyzzyva, FIELD, and elsewhere. Awards include an Eric Mathieu King Fund grant from the Academy of American Poets. She is a faculty member at the Richard Hugo House in Seattle, Washington. Visit www.judithskillman.com