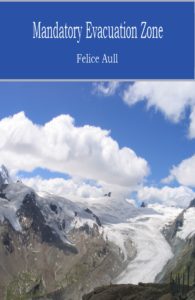 While reading Mandatory Evacuation Zone I was drawn in by the lush journey that spans generations to familiar and unfamiliar places. I take liberty and use the word places here figuratively as well as literally because through the use of memoir these poems tackle such life issues as grief, loss, chronic illness, growing old and divorce. My favorite poems were those set against the back drop of New York City where “pedestrians start moving before the walk signal even flashes.” (94)

Mandatory Evacuation Zone has a political edge. We find that many of the poems contained in Section I of this collection take on political topics like the Holocaust, cultural self-identity and race relations. Listen as the speaker in the poem “Shades of Gray” reflects upon a “recently unearthed” photo:

This is my mother in the early ‘30s
in Germany. Soon all her family
would be strewn across the globe
and some would come to woeful ends.
In this image, I can’t untangle
the history from the face,
as if that hint of sadness
were foreknowledge. (17)

In another poem, “Language Shards,” the speaker laments over losing her mother tongue:

I envy young Latinas who
move so fluidly and publicly
between two languages, mourn
I can’t share this essence of self
with my daughter, who chose French,
grieve that my lingual line
has no heirs. (21)

Another standout poem from that section, “Jackie Robinson, Father, and I,” recounts a family trip to a baseball game while speaking about being an outsider in society:

My refugee father
and Jackie Robinson—both
outsiders sliding to safety
and I, born overseas (19)

What is most striking about this collection is Aull’s ability to grab readers by the hand and take them with her wherever she decides to go. She does this by giving us visceral images to work with. Whether it’s a “Mill Town” with “Low and long red brick buildings” (76), or Alaska, “Vast as oceans, tundra spreading its spongy mantle on and on” (66), or maybe we’re caught in a “City Hurricane,” “driven, like the roiling waves, spilling on to East River walkways” (55), we find ourselves sitting right next to Aull taking in the view. A voice of authenticity resonates throughout making the poems relatable and relevant.

I was particularly moved by the poem “Reaction Time,” where the speaker reflects on what she would have done differently in a life-threatening moment:

I would have called 911
as we finished our dinner…
but there was no yellow warning light
propelling me forward.
When I heard the thud, I assumed
it was the shampoo bottle that had fallen,
which happens often, with a bang.
So it was minutes, irreversible minutes before
I knocked on the bathroom door
and called out his name. (94)

What’s more, Mandatory Evacuation Zone steers clear of sentimentality. Instead, it charts a life that is celebrated in spite of the trials encountered along its path. Aull triumphs as she uses language that is precise, determined and honest. There’s a steady rhythm between the sections in the book that nestles the reader in a “zone” comfortable for seeing, hearing and feeling the many facets of life as expressed in the poems. The human spirit soars gaining strength whenever we’re able to connect with a piece of art. Mandatory Evacuation Zone is one of those times. This book is an exquisite example of life imitating art which gives us reason to stand back, take pause and reflect. Mandatory Evacuation Zone is a positive ray of light beckoning us to live through the eyes of the poet with vision, grace, dignity and keen observation taking with us the lessons life has to offer.