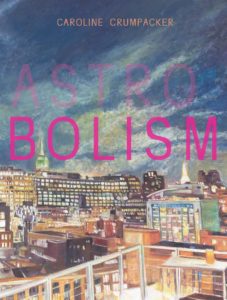 Astrobolism: The result of being struck by a star. The blasting of plants by the sun in high summer. From the Greek astron, and bolis, or missile.

So begins Caroline Crumpacker’s debut book of poems, Astrobolism. I was unfamiliar with the meaning of the title, but on the copyright page the definition is printed. And the poems that follow redefine many aspects of this world, blurring the lines between the political and the personal. The opening poem, “Afternoon of the Public Body,” brings us into a dinner scene where the speaker picks apart the words and actions of a public official, evoking a range of emotions.

A period of satiation may precede the use of force.         He senses this.

Many poems in the book are unsettling because they speak so matter-of-factly about the state of the world. Reading Crumpacker’s poems is like carefully moving from one stepping stone to another, acutely aware of the danger of falling. Her use of white space is partly the reason for this effect, but so, too, is the sudden introduction of insights that make the world around us crystal clear, such as in “Upon Nostalgia” (3). In the third stanza, the poet tells us

The spacing helps us slow down and reexamine our relationships with each other. One of my favorite poems in the book is “Charm Detection” (17). In two lines, Crumpacker sums up how technology has changed our chemistry.

Virtual sensation is more addictive         than actual
sensation         because it gives less.

But forthright observations like these are tempered by where they find their aim, in the lives of people we know and love. Later in the poem, Crumpacker writes

Crumpacker is no newcomer to poetry. She has authored several chapbooks, was a founding editor of Fence magazine, and has published poetry and reviews widely. But in Astrobolism, it is clear that she has much more to say. “Let us then begin” is the last line of “Introduction to My Work. It is an inviting line, but one that, when attributed to the book as a whole, is provocative. Where to begin to talk about these poems, so full of smoldering fury and hopeful wisdom? Perhaps this question is why “Introduction to My Work” appears in the middle of the book (32). The language is unexpected, and the ideas are clearly introspective but still universal.

Later in the poem the vision of that work, in physical form, appears, along with the final thought provoking line.

Let us then begin:

To live like the speaker of Crumpacker’s poems is to be well aware of the bad in the world, but aim to remind the rest of us of the good. These poems walk a fine line between condemning and praising our society, but never without hope, never without the intention to raise us up. With language that sometimes stutters to make a point, the poems of the Astrobolism use creative spacing, broken syntax, and hearty vocabulary to move these poems far above the ordinary.

Christine E. Salvatore received her MFA from The University of New Orleans. She currently teaches literature and writing at Stockton University, in the MFA Program at Rosemont College, and at a public high school in South Jersey. She is a Geraldine R. Dodge Poet and a regular faculty member for Murphy Writing of Stockton University. Her poetry has recently appeared or will appear in Diode, The Turnip Truck[s], The Fem, The Literary Review, The Cortland Review, Mead Journal, as well as others. More information can be found atwww.christinesalvatore.com.