If I were to leave them
two glasses of milk,
don’t write about that,
write about the napkin-
the perfect triangle tucked
around the circle of glass,
the absorbed condensation.

If I were to leave them
two glasses of milk, it would be
the tension of motherhood
and career, poet and wife
pulling like teeth at my
extended nipples until I was
greedily consumed in silence.

If I were to leave them
two glasses of milk,
even across my tombstone
would be the words:
daughter, wife, mother.
Identities like anchors,
so heavy I would carry
them even after death.

*Note: The poem “Two Glasses of Milk” references Sylvia Plath’s suicide. On February 11, 1963, Plath placing her head in a gas oven. She left bread and milk for her two children, sleeping upstairs.

The Return of the Prodigal Mother

Here’s what I am supposed to want:
a husband, children, a pretty jeweled
leash. That I run thru his hands

Know this— I crave the wind, its lashing
promise. At night I dance untethered under
swollen clouds, let the humid air suckle my skin.

But for now, I shout through pursed and painted lips.
I kick back with a dainty-slippered foot. I breech this birth.
This time blonde, next brunette, I will come back. Again and again and again. 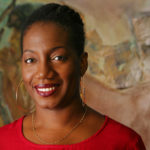 Teri Ellen Cross Davis is the author of Haint, winner of the a 2017 Ohioana Book Award in Poetry, a Cave Canem fellow and has received scholarships to attend the Virginia Center for Creative Arts and the Fine Arts Work Center in Provincetown.