“If a raven got in a fight with a crow,
who would win?” my son asks.
“Why would a raven fight a crow?” I ask.
“It’s a strawberry,” my son says. “They’re fighting over fruit.”
“It’s hard to imagine a fight over a strawberry,” I say.
“Animals fight over food,” my son says.
“Yes,” I say, “but a strawberry? It wouldn’t be a very serious fight.”
“Oh, it’s serious,” my son says. “To the death.”
“I don’t think ravens and crows fight to the death,”
I say. “Can’t they just go find other strawberries?
Look around. It’s June. Strawberries everywhere.
The air smells like strawberry wine, which you are never
allowed to have because of the alcohol.
I don’t think birds fight to the death,” I add.
“These birds fight to the death,” my son says,
“over strawberries, even when there are strawberries
everywhere, even when it smells like strawberry wine,
which I am never allowed to have, because of the alcohol.”
He looks at me, patiently, watching me weigh the odds.
“You know the raven is bigger,” I say.
“So the raven would win?” he says.
“Not so fast,” I say. “Crows might have other crow buddies
around. But can’t one bird chase off the other –
why does it have to be to the death?” I ask.
“Because I’m nine,” my son says.
This explains everything, except:
“How does my choice matter?” I ask.
“I mean, this whole conversation is pretend.
There’s no raven, no crow, no strawberry,
no fight, no death. There’s definitely no death,” I say.
“It’s a very important strawberry,” he says.
“I’m not sure I can finish this conversation,” I say.
“As your mom, it’s necessary that I address
the reality of death in a way that’s age-appropriate
and acknowledges the inevitability
of our eventual demise. Death is not a joke.
It’s not a casual topic of conversation,” I say,
“and you know how fond I am of birds.
How could I ever pit ravens against crows?
It would be like pitting my children
against each other,” I say.
“So the crow wins?” he asks.
I say, “Not on your life.”

First published in Hobart. Rights have reverted to author.

Snakes could be anywhere, which means everywhere. We kid sandwich: parent leading, kid kid, parent trailing. It’s hard to watch where all the feet go, all the hands. Don’t grab the vines. Don’t grab the vines. What did I just say. The insanity of parenting: saying the same thing, expecting different results. A list of things that look like snakes in the jungle: all of it. There’s a group of 60 school kids from The International School. “They’re so lucky,” our daughter sighs, “coming here with their class.” We watch the students descend on the breakfast buffet, strip it clean. Are there piranhas in the river? I think that’s South America, but don’t let your hands fall over the boat’s edge. First snake spotted: arboreal, keeper of treetops. Paradise flying snake: say no more. When we walk by the cabins, the school group yells “Hey kids!” to our two in a jingle of accents. Dennis and I are poor substitutes for the company of children, but we’re great about picking up the tab. Boots rimed with red clay. Is that elephant or tapir poo? The disagreement is long and ends in mediation. In the welcome center of Taman Negara, a poster on “The Medically Important Poisonous Snakes of Malaysia,” which implies a larger group of snakes contributing nothing to medicine. By day 4, the kids are 20 yards ahead, waiting at junctions and steep downhills. I’m the only one who gives up ego for guide ropes, my daughter’s sweaty hand limping along in mine. When she slips, I say “I’ve got you,” but that’s not really true.

First published in Panorama. Rights have reverted to author. 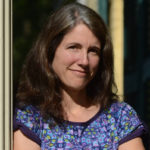 Karen Skolfield’s book Frost in the Low Areas (Zone 3 Press) won the 2014 PEN New England Award in poetry and she is the winner of the 2016 Jeffrey Smith Editors’ Prize in poetry from The Missouri Review. Skolfield teaches writing to engineers at the University of Massachusetts Amherst.