The Best Literary Writing About Mothers and Motherhood
You are at:Home»Reviews»Book Reviews»Bettering American Poetry 2015: An Anthology 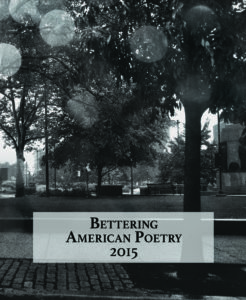 The Bettering American Poetry 2015 project grew out of discontent. A group of editors were disgruntled by the fact that an author, Michael Derrick Hudson, received publication at a site by resubmitting a previously rejected work to the same venue, this time using an Asian-sounding nom de plume. His poem was published in The Best American Poetry 2015 without a word of explanation about the origin of the selection.

The above-mentioned enraged editors were tired of the control literary gatekeepers exercise. (They regard the gatekeepers as most frequently white, male, and holding positions of recognized standing in U.S. academe.) They sought to compile a new type of anthology confronting the old guard by publishing works that challenged and uplifted them, and placing marginalized poets at the center.

Each of ten editors used their own approaches to select their works, sometimes choosing a long-admired poem, sometimes poems and poets entirely new to them. These editors shun the “hypermasculine Hollywood whitewash” styles apparent in writers’ workshops and oppose what they call “state-sanctioned murder” (14).

“Many of us feel constantly depleted just trying to keep up with the blistering pace of the violence that bombards the most marginalized among us,” they state (14). Four of the editors, Hector Ramirez, Vanessa Angelica Villarreal, Sarah Clark, and Amy King, felt impelled “to remember the dead, the ancestors, and those who disappeared, resisting the tendency to become desensitized to violence” (14). They resist “Whiteness, Heteronormativity, Ableism, Imperial Capitalism, Nationalism(s), and the nexus of powers that continue to preserve our oppressive American way of life,” as they see it (15).

The poets in this collection, then, range from those previously published in prominent literary journals to those holding few credentials but displaying exceptional talent. A predominant number are of mixed gender identity or are members of other marginalized groups. Many hold Cave Canem or Canto Mundo Fellowships. They come from San Juan to Santo Domingo, from New Mexico to Cairo; some dwell on American Indian reservations. Many teach creative writing in U.S. universities and colleges.

In Marcelo Hernandez Castillo’s poem we read: “I want to be all pink. For one day; / to name each part of me after the names of my mother’s lovers, / to throw my head back and dance like someone pretty, / or just hold the shame in my hand.” (37)

Another remarkable poem is Layli Long Soldier’s “38.” She gives the history of the hanging of thirty-eight Dakota men (executed by order of President Lincoln in 1882), and decries the unkept treaties between the U.S. and the Dakota Nation. (111 and 113)

How dumb // we must have been—

To hold each other so frailly.
To hold anything at all— (163)

Bhanu Kapil asks in “Mutations and Deletions (3): For Ban”:

Was it this doorman, I think, who brought the white sheet…and threw it over the denuded [dismembered]body of Jyoti Singh Pandey and her partner, who lay, also, flailing, there, on the dirt… before any one of these people—bystanders—called the police? (96)

Spasms, deliriums: madness is such a female world, but that’s just my take.
Failing often and long at it, I do claim to know girls are there for blame.
You too can be matter, purplish and pale: the universe’s chasm.
I noticed you when you got lustier by calling down a blood spell.
Cleanliness is only a necessity in hospitals, is what I teach my daughter.
She will be filthy. (161)

Mothers of all convictions should read Bettering American Poetry 2015 for exposure to Queer art, exposure to the sufferings of people burdened by identity confusions, and exposure to outstanding talent which will not be suppressed by social injustice in all its many forms.