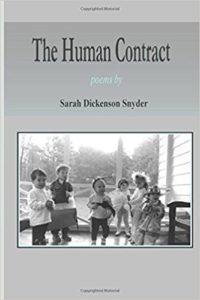 Sarah Dickenson Snyder is a mother and English teacher as well as a poet who has published in a wide variety of journals and won several awards. Her chapbook Notes from a Nomad is forthcoming from Finishing Line Press. The Human Contract is her first full-length collection, and it is a true pleasure to read.

This book looks at mothering and daughtering over generations and examines a woman’s life in these roles. Much of its delight lies in the sustained sensibility of the speaker, who is consistent in how she observes and interprets the world whether she is describing early childhood, her mother’s decline, or her own child. She is a detailed yet matter-of-fact observer, often reporting rather than interpreting. Yet the details she reports are their own interpretation.

Snyder writes in free verse, often unrhymed couplets or tercets. Each poem is inhabited—no one would claim there was no one home in this work. The poems are for the most part short, focusing on a brief experience that may be painful, joyful, or even funny. Mothers and daughters will not be able to avoid identifying with the situations she describes, most of them so common that we have all experienced them, yet in the poems they are individualized by her unique voice and memorable images.

Some evoke a smile or even laughter, especially among those who have shared the experience. “Wood Stove Cleaning” describes the mild paranoia of a woman with someone working in her house she doesn’t quite trust. “I’m taking Fish Sticks Out of the Freezer” shows a harried mom trying to throw together a meal while her two children are asking sticky questions about sex. Her attempts to be honest but not too honest, and her children’s candid responses, are delightful.

Other poems reminisce about childhood, but not always nostalgically. The speaker’s mother was apparently not a warm approachable person—she won’t let her daughter wear her wedding gown, and is in general more practical than demonstrative. Yet the relationship is still powerful, and the mother’s decline and death are described affectingly in “My Mother,” a poem that reminds me a little of Sharon Olds’ poems about her father. Snyder confronts death straightforwardly and realistically, though there is an occasional glimmer of the spiritual—just a spark in some of the scenes.

Perhaps the most memorable poems, though, are the ones about her own children. She is very aware of their physicality. “First Bath” shares that primal experience that most of us have forgotten. “Close Reading” observes a son as he begins to grow away, into his own world.

A son lost in this space,
mesmerized, content to sit
close to a bookshelf as if it offers heat

& presents to open. Each page turned
with small fingers, gliding eyes across
an opened expanse, lifting paper until

he begins another. Books pile by his side—
a tower he’s building about to buckle,
the weight of what he’s doing on his own. (24)

The title poem is funny and tender, and underscores the theme. Unlike the others, it narrates a truly unusual event. The speaker is driving down the road and chokes on some gum. She imagines her obituary as she tries to draw air. But after she attracts the attention of a fellow driver, he pulls over and performs a Heimlich maneuver on her: “…an angel jumped out, / pulled me to him, my back against his chest—/ a sudden thrust of fists below my ribs unhinged / the wad. We stood there on the side / of the highway like that, me shaking, / him, holding me backward.” (16) The narrow escape and the rescue telegraph the message. We are all a part of this contract, savior and saved, and we have to live out our “human contract” despite obstacles and discomfort.

One of the charms of these poems is their spareness. Quoting passages does not do them justice, nor does even quoting whole poems, because their effect is cumulative. We step into the mind of someone who is a keen observer and a precise reporter of the life mothers share. The collection provokes reflections on our own extended families, and what we hope to keep from our own rearing and what we would like to leave behind.