The Best Literary Writing About Mothers and Motherhood
You are at:Home»Reviews»Book Reviews»Have You Seen CindySleigh? & Other Stories by Diane Stiglich 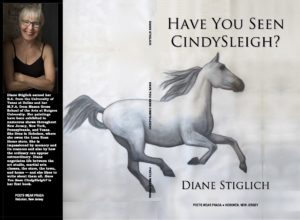 Diane Stiglich, a writer and painter in Hoboken, New Jersey, captivates readers with her debut novel. A quick read at 134 pages, it is officially three interconnected stories, but they flow into each other so seamlessly that it feels like one continuous tale.

A dreamlike work of magical realism, Have You Seen CindySleigh? takes us down many unexpected paths, filled with randomly appearing bottles of champagne, iPods, and a truck named Karen. We encounter a priest, gods, demons, and shape-shifting animals. In what feels like a dream within a dream, The Author herself appears to defend Cindy from El Diablo. “I, like you, sir, have no actual spoken name. I am referred to as the Author” (53).

It is as if we have entered a painting and it has come alive:

In her mind, she creates a drawing, a self-portrait, graphite on paper: in a frontal stance, perfectly calm and normal, although her chest is open to expose her heart. No bone, muscle, or skin protect it from all of the feelings and emotions that spin around her like a whirlwind. This self-image make sense. In it, as throughout her entire life, her eyes are askew. (25)

This feeling that we have wandered onto a canvas is refined as the chapter progresses: “Details of Van Gogh paintings have been recreated on each wall; Starry Night swirls across the ceiling” (27).

This is reinforced again further on: “The empty space with a moving shadow, so much like a moving painting. Sand made a great negative space for the shape and figure of Cindy’s shadow as she danced in the desert” (55).

It is a story of transition, acceptance, and desire. As CindySleigh tells Mephistopheles,

I am a virgin of sorts, for no matter how many lovely, sordid sexual things I have done in this lifetime, I could never create a child…Vases are beautiful in and of themselves, but there is something so much better when they are filled with flowers: even one flower would make all the difference. (60-61)

CindySleigh is given a demon child, called D.C., whom she tries to love into domesticity, but he is feral, shape-shifting and untamable. Yet the fulfillment of this desire is not the end of the story, but rather only one path it takes.

The book is a dream-like art-come-to-life world, where there are truths that are as immutable in this reality as in the one on the page, and stumbling across these truths is as if we find something solid to hold onto—grasping a rock after clawing at clouds:

One conundrum in life is that one can simply not go back. You can never go back to the way anything was, and what you remember rarely ever proves to be what was, anyway. (64)

This loss cannot be found; this loss cannot be replaced. When you feel this non-feeling, your body takes on a surreal lightness. That is the numb. Yet, there also is a deep heaviness that gives all movement the sensation of stretching limbs though earth rather than air. (86)

I don’t read much magical realism. I found the story hard to describe but achingly beautiful: “Pieces of pain were scattered about in the form of a broken mirror” (116). I felt a connection to CindySleigh as if I had entered someone else’s dream and dreamt it myself—the swirls of emotion and imagery lingered long after I closed the book.

Lara Lillibridge recently won both Slippery Elm Literary Journal’s Prose Contest and The American Literary Review’s Contest in Nonfiction. Lara’s memoir will debut in fall of 2017 with Skyhorse Publishing. Some of her work can be found on her website: http://www.laralillibridge.com/.