The Best Literary Writing About Mothers and Motherhood
You are at:Home»Curated»Mother Dispossessed - Poetry»Poetry by Esther Cohen

Clara Lemlich young Ukranian immigrant
gave a Yiddish speech I’ve Got Something to Say
after the Triangle Shirtwaist Fire
20,000 immigrant women
all joined to make a union all those women
at last night’s Clara Lemlich awards
women in their eighties nineties hundreds
still fighting still taking care of us all

I have always looked
for mother figures. Of course I had a mother.
She tried in her way. I wanted a different
kind of mother a different mother.
Warmer, braver, standing on picket lines,
not so afraid of what anyone might say,
even the neighbor.

When we adopted Noah some people
said one day you
will have a real child.

And now, at the Clara Lemlich Awards
this year, six women who lived ways
big and small, I heard those women
and knew, for the first time, how we all of us
are one another’s mothers.

a flimsy fire escape, a locked exit: workers died as a result of a fire that consumed the factory. Workers were either burned to death or died jumping to escape the flames.

https://en.wikipedia.org/wiki/Clara_Lemlich
• And their work continueth,
Broad and deep continueth,
Greater than their knowing.” 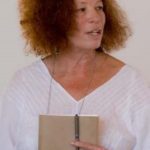 Esther Cohen writes, teaches, and is a cultural activist. She publishes a poem a day at http://esthercohen.com.