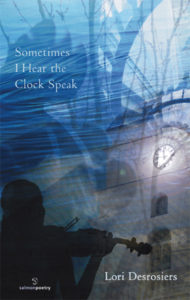 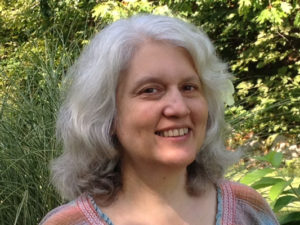 Music sets the tone for Lori Desrosiers’ second full collection of poetry, Sometimes I Hear the Clock Speak, in which poems relay a family history of music, dance, and song. Like a tango, Desrosiers leads us from adulthood to childhood, from the present and back to the 1960s. Each movement brings us closer to an understanding of how time stays in motion but the voices of the past accompany us generation after generation.

Sometimes I hear the Clock Speak is divided into four sections, linked by imagery of violin music, guitar thrumming, and lots of dancing. In fact, the first three sections have poems that contain “dance” in the title: “Dancing with Mother,” “Dancing with Valerie,” and finally “Bee Dance.”

But dance is a worthy metaphor for the sequencing of these poems. Anything but chronological, the book reads as if we were shuffling through a box of old photographs. The poems are heavy with the imagery that makes up a life of a family, and bounce between straight narrative and imagery presented in a staccato rhythm. In the opening poem, “The Balance Stone” (11), Desrosiers articulates what memory is like.

Is there a better way to describe the person we once were in a childhood that seems to belong to someone else?

These images set the tone for the first section “Skates and Stones.” In the poems that follow, Desrosiers sways from the loneliness of a seven-year-old at a skate pond to the smoke-filled air of a teenager’s bedroom in the 1960s then moves on to an adult wanting to call her sibling but knowing he probably won’t answer. There is a constant tension between the inhabitants in the poems, such as when the mother needs to escape her children’s musical attempts in “The Year of Bad Decisions” (13):

Mother begged us to take breaks,
tempted us with plates of Ritz and cheddar
a bribe to soothe her delicate ears, knowing
full well we would start again next day.
Perhaps we were the reason she spent so much
time out of the house, finding excuses to leave

The tension continues into the second section, “Echoes and Voices.” Those “echoes” are the voices of fathers and grandfathers gone, all gifted in singing but somehow hindered in other ways. The father of “My Father’s Ear” (34) is half deaf but continues to sing loudly out of tune and conduct Beethoven in the air. His loss here reverberates within the description in “My Brother’s Voice” (27). Harboring a speaking voice like his father’s but a singing voice like his grandfather, the brother, whose singing once made him popular, has grown into a lonely man.

He still sings quite well
but the school girls have forgotten him,
and he has no one to cook for.

In the third section, “Songs and Seasons” Desrosiers lingers mostly in the speaker’s adult life, bursting with images of springtime. That the speaker has found love is evident in the poem “Anniversary” (48) where the speaker reminisces about her wedding day, “Fifteen years ago we stood before sunflowers…Pledged from this day forward / to plant bulbs in Spring.” She uses this verdant metaphor to bring us up to the present.

Today we take the bulbs
from their dark winter storage
beneath spades and rakes,
gently place them
beneath the ground,
another year, as promised.

Although Desrosiers is adept in the straight forward narrative that is the backbone of this book, her poems are best when they are playful and stark, more feeling than sense. In the final section, “What the Clock Said,” my favorite poem, the sparse “Wave” (66), flits haltingly from one image to the next.

Like the opening poem, there is no punctuation, just snapshot after snapshot conveying the emotion. In poems like these, with language so charged, Desrosiers needs nothing else.

Christine E. Salvatore currently teaches literature and creative writing at Stockton University, in the MFA Program at Rosemont College, and at a public high school in South Jersey. She is a Geraldine R. Dodge Poet and a regular faculty member for Murphy Writing of Stockton University. Her poetry has recently appeared in Diode, The Turnip Truck[s], The Southeast Review, Mead Journal, and elsewhere.