The Best Literary Writing About Mothers and Motherhood
You are at:Home»Reviews»Book Reviews»Ordinary Magic by Alison Stone 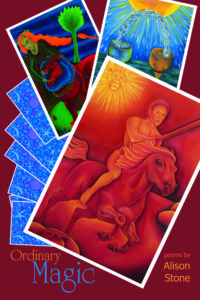 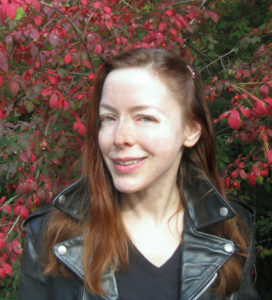 Many people associate the Tarot with fortune-telling and supernatural experience, but this is a somewhat limited perspective. Most historians believe that the Tarot first manifested as game-playing cards. Others view the cards as a study in archetypes and images. As we look through a deck of tarot cards, we can recognize—in the kings and queens, the hermit and devil, the illuminating sun and collapsing tower—images from a life, any life, even our own. The Tarot reveals characters and situations to which most people relate. In Ordinary Magic, Alison Stone celebrates the enduring powers of these tarot images. Stone’s tarot-inspired poems explore a magic, not of a supernatural world, but of this one.

The collection begins with a series of poems inspired by the Major Arcana, the suit that illustrates universal themes and archetypes. These poems, which comprise the first section of the book, mediate on archetypes that reveal aspects of the human condition. In this section, Stone’s images literally speak to us as she adopts a persona for each Arcanum. The speaker’s voice appears to transcend directly from the inherent wisdom that exists in the ancient images.

For instance, as the poem “The Star” reflects upon the tarot image that evokes hope, joy and illumination, as well as spiritual guidance and connection, Stone speaks to enlighten and inquire.

Hush.
Lie down by the still pool,
the sharp hills blurred to shadow.

Why do you think
I’m featured in so many lullabies?

If light were music,
mine would be the tune
your mother crooned as you,
the day’s bumps and abandonments
erased, sank milk-drunk into sleep. (32)

In the luminosity of this tarot image, Stone creates memorable images of her own. The synesthesia adds an aural dimension to the star’s visual brilliance. And throughout this first section, each of the poems exhibits Stone’s innovative, mythic imagery. The section ends with a poem that addresses the last card in the Major Arcana, “The World.” Another auspicious image, the Tarot’s world culminates in fulfillment of a successful cycle, journey, or endeavor. The image of the world speaks to us, not as a place to fear, but one of discovery, exploration, and embracement.

Once the world disguised itself
as a dark cave, every creature
fenced by skin and fear.

Zero is an egg that holds all numbers.
The eager dog of the heart
leaps in its fur of light. (36)

As she illustrates the images in the Major Arcana—with their universal themes—Stone conveys the same message to each reader. However, in the following sections, inspired by the Minor Arcana, her perspective changes—from the universal to the particular. The Minor Arcana, which includes the suits of wands, swords, cups and pentacles, evokes images that pertain to everyday life. Here Stone adopts a more intimate and accessible voice as the speaker communicates from a personal perspective. She no longer speaks from the distant, philosophical viewpoint, but from the perspective of interpreter, someone who assesses the relevance of the image in her own life. As the Minor Arcana illustrates characters, activities, and emotions derived from the everyday, the speaker identifies them through scenes from literature, contemporary culture, and personal life. Stone identifies Steve Jobs as the King of Pentacles, Vivienne Eliot as the Queen of Cups, and her grandmother as the Queen of Swords.

In the poem “Rope,” the speaker interprets the Nine of Wands, the Arcanum that portrays a wounded but perseverant and successful warrior. The card often signifies the endurance of a final test before reaching a goal, maintenance of stamina in the face of setbacks, and persistence in spite of danger or adversity. Interestingly, the speaker sees the Nine of Wands in light of a precarious incident at her daughter’s birthday party, as she considers the fate of a child acrobat.

In a harness hung from the ceiling, the children
Soar above our heads.
My daughter first—it’s her birthday.

She squeals, giddy with flight. Returns
To earth red-faced and proud.
Each girl takes a turn while

Others yell her name.
As the last girl swings, one rope
snaps.

The harness arcs. By less
Than half an inch
she clears the metal pole . . .

Still shaken from witnessing the event, that night, the speaker recalls the event: the skill or luck that prevented disaster, and instead, created a successful outcome. She considers virtues and limits of persistence.

I see the broken rope. The girl,
the pole, the inches fraction

between them, grace
or pure dumb luck
which may not hold. (46)

Here we can see a familiar scene: a child narrowly escaping accident, a mother contemplating the limits of her protective role in an unpredictable world. Stone’s Minor Arcana poems speak, more frequently, in the personal narrative, where she constructs her poems from the practical nuts and bolts of everyday life.

In Ordinary Magic, Stone illustrates the significance of the images we encounter, in the Tarot, in poetry, in memory, and daily life. Stone views magic in the way images transcend and endure, across cultures and generations, uniting us in shared human experience.