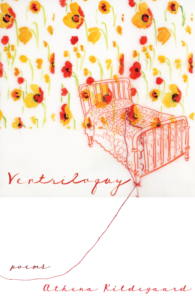 In the the past 400 years, ventriloquism has outgrown its association with demons in the belly and has come to be associated with funfairs, vaudeville, Shari Lewis, Paul Winchell, the Letterman show (after Willie Tyler was once invited), Vegas, and the college entertainment circuit. With the appearance of Athena Kildegaard’s Ventriloquy, however, it now sits at the left hand of the divine.

Take “The Saint of Grace,” for example. Like the other twenty-six “Saints – Contrary and Futile” that populate Ventriloquy, the Saint of Grace’s title is also its first line:

The Saint of Grace
eased his way, fluid
like a child’s bubble
prismatic as a trout
sure of where he was going. (29)

and, like that trout, we swallow the poet-angler’s hook and ride the poem out. This is smooth, intellectual, faux-ecphrastic writing. Despite the saint’s gender, I was put in mind of a story my elegant great aunt once told me of her having felt—as she walked down Parade Street in 1913—the elastic pop on the bloomers that she wore under her skirt. By slightly slowing her stride, she let them slip and slip and slip until she could finally step out of them. She left them on the sidewalk where they fell.

Ah to move with such aplomb.
The saint sloughed praise,
carried on suffered no vanity,
was pleasant no matter the company,
eased on past. (29)

And how is it for the unfortunate in our prisons, where the condemned struggle against drugs that anesthetize them poorly while killing them slowly? Or the monstrous history of lynching in America?

Until the end,
dangling, kicking,
pissing himself
just as they all do,
just as we all do (29)

Because death is real but not beautiful, not decorous. If it is the end—well—it is only one kind of end. Something does live on afterwards:

an arabesque
a murmuration
a mouchette
a trepidation (29)

And so ends “The Saint of Grace.” (I construed the mouchette as a reference to the Robert Bresson film, with its depiction of fleeting beauty in the sad brutality of life. The poet may have had something else in mind. But that’s a different tangent.)

“The Plastic Saint” is a tricky mouthful of a tongue-pleasing poem that ends with the kind of biological insight that can turn a person political. But Kildegaard never forces the political on her reader and almost never unveils the personal, either. I confess to having a yen for poetry that looks me in the eye while it grabs my squishy torso in its hands, poetry that is over-the-top emotional, furious even, but Kildegaard doesn’t give me that. She does, however, give me cerebration, especially in her series of sweet little prose poems, “Still Lives.”

The twenty still lives are even closer to ecphrasis than the saints poems—as one would expect—but there’s also something of the tender button in them. They are not as hermetic as Stein’s buttons but they do contemplate objects through a peculiar not particularly intimate lens, more conduit than ventriloquy. They take on the big world: “Still Life with Oil Rig,” “Still Life with Heron Rookery,” “Still Life with Carnage.” These are titles to kill for.

Still Life with Tides
Is art only mourning? A cry
for what is and how it will be
no more? For what could have
been? What should have been?
Here, a halved papaya, the seeds
black orbs of impermanence, so (88)

Like a birthday present for your best friend that you deliver before the day, after practically telling her what it is over the phone the day before, I want you to know that she finds in those seeds something “beyond/ flesh, beyond desire—separate/from all else in the painting.” I want you to wonder with me about the juxtaposition of the tides with the seeds and the meat of the fruit, and the ephemeral (or is it the permanent) nature of art.

Kildegaard is on the faculty at the University of Minnesota, Morris—way out there – and in her earlier work, she frequently privileges prairie themes. She has had two poems selected and read by Garrison Keillor on his Prairie Home Companion. Her book Bodies of Light (2011) was a finalist for the Minnesota Book Award: I’m going to ask my local library to order it.

Judy Swann is a poet, essayist, editor, and bicycle commuter, whose work has been published in many venues both in print and online, including recently, Writing In A Woman’s Voice, Mom Egg Review, and The Way to My Heart: An Anthology of Food-Related Romance. She blogs at ebikeithaca.org. Her book, We Are All Well: The Letters of Nora Hall, has given her great joy. She is currently riffing on a cartoon superhero from the 1980s in a soon-to-published volume entitled Je Suis Stickman. She loves. She lives in Ithaca, NY.