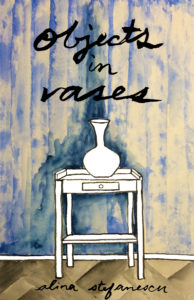 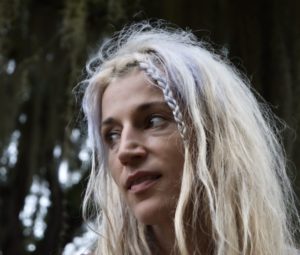 Objects in Vases reminds us how startling realizations can be summoned from our observed and disseminated domestic lives, narratives of both the trapped and treasured truths of ourselves. These revelations of family, romance, and selfhood come together to create a hard-won and preserved identity.

In the poem of the book title, which heralds all to come, Stefanescu begins with the first of three strophes that alternate with stanzas that integrate portraits of intimacy: “To describe the lilacs / I begin with the vase // a clear glass space where curves converge,…” and remarks that this is “…a vessel which uncloisters the / divine. The vase is a material object; the / flower forms itself, inscrutable.” She then brings a narrator plus her lover, working from the outside-in to make them materialize as they are stripped to intimate essence from their respective costume and physicality: “To describe her body /I begin with the clothes…// To describe my partner / I’m struck by his architecture” (11).

The risks (and rewards) of love are examined in several poems, and in “Three Words to Break a Bone,” we learn how language (and its clichéd promise) can reduce girlhood’s determination and buoyant gestures toward independence (“…a child / on a skateboard who / thinks she can fly…”) until she fully succumbs to the gravity of his pitch (“Know: the boy who admires her hunger for pure blue sky / will say three simple words that break her knees.”) (15). It is a co-opting of dreams, one that brings him further glory: “And he will claim the clouds / in her stead. Land his stallion / legs on paved applause” (15).

“If Caring is a Form of Choreography” and “The Winter Before the Freeze” gently but wistfully show the hardening of gender roles in a son’s youth, diminishing a closeness in the relationship as it alters his expectations and heightens the difference in their temperaments. The former poem begins with an innocent fascination and delight at the maple seeds spiraling down from trees:

The little boys marvel
over maple seeds, the
faithful twirling down.
A scent of baby sweat
curling, barely couth.
From each that falls
emerges hope. What
rises in thick, good roots
may be a sprout, a tree.
Hope is this possibility.

But as one boy “loosens his awe / to let loose a boom, a BAM,/ a bomb…” the scene morphs into war play, and “It doesn’t take long for seeds / to become bomber jets.” Thus, the awkward indoctrination of masculinity “…brings a glut of death. Spite for living.” The mother, as worried witness, intercepts the attacks, “lest this destruction/take root” (30).

In the latter poem, the narrator loses her young cohort in the kitchen, and cooking becomes the contention of gendered ritual. Her son, whose hands “forged food together” with his mother, “lips humming / a shared song” just a season ago, is now exposed to other attitudes that create a rift in their bonding:

He returns from school
with cold-chapped cheeks,
my son whose scowl
spears the lentils simmering
atop the stove. A boy
scorns the pot he
once stirred before
unlearning. (30)

This striving for a recognized identity includes the imposed conflict of citizenship and ethnic origin, and the poem “Your Open Borders, a Fissure,” is uncomfortably relevant in the current political climate. It begins, “I have been the illegal import, / my customs held up at airports, / the baggage claimed too foreign / for absorption. Emerge unstamped.” The rituals of the promised land, hypocritical practices and vows, and myths of the melting pot, are all referenced as the narrator admits, “I have watched the American dreams / go viral…// Your goods travel/ freely. I am the promised democratization.” (41) In “Address” Stefanescu is in her element, as the lines float and dance on the page with synesthetic grace and confident self-declaration:

you like my name
a Romanian
hand-me-down
Alina means to soothe
and caress
a tunnel of raw silk scarves
billowing
into
a dress. (25)

Objects in Vases immerses the reader in a personal, sometimes challenging, but always engaging process of self-discovery.