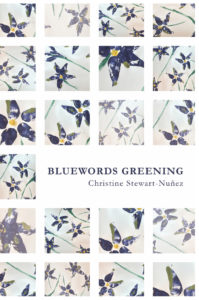 Christine Stewart Nuñez published three poetry collections prior to Bluewords Greening, yet this latest book feels like a life’s work. It encompasses years of motherhood clouded by the struggle to understand and cope with both her oldest son’s mysterious seizure disorder (the focus of the first half of the book) and her recurrent miscarriages (the focus of the second half). Stewart-Nuñez, a professor of English at South Dakota State University, talks through these intimate agonies with reference to medical science, visual art, the natural world, and the philosophy of medieval mystic Hildegard of Bingen. Throughout, she gathers her feelings of loss, bitterness, and disappointment—held plainly in her hands in the prologue poem, “Signing 101″— into verses that order the chaos. However powerless she may feel in the face of the body’s betrayal, there is salvation in structure, and she keeps faith by crafting homes to hold her crumbling hopes: “But when I build a nest of words, / paradox and ambiguity kiss each time, / offspring running down the page” (68).

Stewart-Nuñez’s son, Holden, ten years old as of the book’s publication, suffers from epileptic aphasia, but her poems capture and preserve his voice: his adorable pronouncements as a healthy five-year-old, his joyful “Yahoooooo!” when he sees the waxing moon on his way out of the hospital (13), but also the words that don’t connect to meaning. The “bluewords” of the title are the utterances of a boy who can’t fully access the power of speech: “The poet’s son, lost / language, his seizure-stabbed brain / a sieve oozing words” (32). “Lexicon for Landau-Kleffner Syndrome” and “Ode to Echolalia” offer many examples, as does “Thirteen Ways of Understanding Blueword,” a fascinating parallel to Wallace Stevens’s “Thirteen Ways of Looking at a Blackbird.” The blueword is like the blackbird, a flying thing “appearing or just leaving” (33), but it cannot sit quietly. Whereas Stevens talks of “noble accents and lucid, inescapable rhythms” in his eighth verse, Stewart-Nuñez blasts us with the inescapable rhythms of nonsense: “Blue blue blue /Blue world, blue wood / Blue bird, word, blue” (34). Stevens concludes with his blackbird perched amidst endless snow; Stewart-Nuñez concludes with endless seizures, “the blueword lodged / in the back of his throat” (35). By following Stevens’s poem closely, she finds one of many ways to communicate the isolating experience of communication gone haywire.

Seven of Stewart-Nuñez’s poems engage with the paintings of women artists, another way of placing herself in conversation. Her poems are rich with gorgeous color— “May’s viridian” (24), pansies “the hue of wine, periwinkle-lined” (62)—insisting on a greening (that is, growing) world beyond the omnipresent threat of blue. Thus, it’s especially appropriate that she turns to the visual arts for sisterhood (and equally appropriate that the cover of Bluewords Greening is a bewitching work of botanical art). Most of the referenced images are inaccessible via the internet, but it’s not particularly necessary to see them in order to understand them as a site of both inspiration and fellowship. Ekphrasis is an avenue of organization, even when it inspires her to disorganize her own language; in response to one (presumably abstract) painting, she writes, “I’m tempted to clip lines, snip apart / a surface of syntax, toss up a strip / of sky-surfing letters” (51).

That temptation, however, is one to which she seldom succumbs. Rather, she uses poetic form to great effect. With rhyme and repetition, she makes her own patterns as she confronts the complexity of seizure patterns (“Kindling”). With breezy couplets, she makes Holden’s outpouring of confused chatter into a song that ties together mother and son, as long as his voice can find its way out (“Ode to Echolalia”). She arranges couplets in three-line stanzas, slanting rhymes all along, so that a poem’s pieces don’t quite fit together (“Boy at Rest”). Like Stewart-Nuñez trying to interpret Holden’s broken language, we have to stretch to connect, to imagine the solid click of a rhyme where there may be only assonance. With hypnotic litanies and alliteration—sometimes sonorous, sometimes jolting—she shows us her well-laid plans tossed up and scattered.

Her epilogue poem, “To My Sixth, Yet Unborn,” is both strongly formal and strongly hopeful. Speaking to her second son, who will arrive after four miscarriages, she says, “Because, in love, I gamble on success, / I find my faith in everyone refreshed.” With neatly rhymed quatrains, she asserts poetry’s power to make a creative pleasure out of uncertainty and hard, baffling truths—a pleasure that she shares with us in tandem with her sorrow.