The Best Literary Writing About Mothers and Motherhood
You are at:Home»Reviews»Book Reviews»There’s a Ghost in This Machine of Air By Iris Jamahl Dunkle 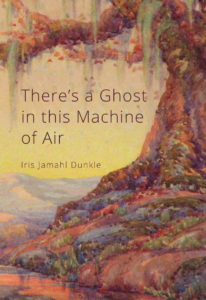 “To question history is to watch the chaos of its particles / glisten into discernible patterns,” Iris Jamahl Dunkle writes in a poem called “Hybrid Algorithm” (83), and this is the central project of her deeply engaging second book, There’s a Ghost in This Machine of Air. One epigraph for the book is James Baldwin’s acerbic comment, “What Americans mean by history is anything they think they can forget.” But Jamahl Dunkle’s work is to make us remember, through fact and imagination—to create our sense of a place that is at the center of American history in the various stages of its plenitude and dispossession, its damage and beauty.

Specifically, this is a book about Sonoma County, California, one of the richest agricultural areas in the United States, described by Luther Burbank in the late 1800’s as “nature’s chosen spot” (“The Mother Tree at the Luther Burbank Experimental Farm,” 36). Like W. S. Merwin’s The Folding Cliffs, it tells a story of colonization—in this case, by whites lured by the promise of gold or, if gold failed, of timber and rich farming, to the California coast and immediate inland. As Jamahl Dunkle writes in “Gateway” of the nineteenth-century settlers in the area,

…Body stiff from
too many hours sitting at the helm
of the massive cart, the mind wanders, spins
cities out of fields, spells fortune out of stars. (26)

The discovery that the area was ideal for the cultivation of Gravenstein apples, the seeds and cuttings of which were brought from Europe by steamship passengers, led to orchards that “covered the bare hills as fast as they were cleared of scrub oak and pine and Miwok. And the years seeped in. The horticulturists grafting to win a longer market, a higher yield” (“Sweetbitter” 18). The rest inevitably followed—wealthy, prosperity, expansion, but also displacement of Native peoples and environmental degradation. Jamahl Dunkle makes us aware that

The land was first the land’s. Then, the Pomo,
the Miwok and the Wappo lived on it.
The tribelets of the Konohomtara,
the Kataictemi and the Biakomtara
settled on different sections of the wide
Laguna for over 10,000 years.
Little changed…. (“Tending the Sedge” 44)

But with white settlement, change took place with explosive rapidity. By the twentieth century, for instance, the town of Sebastopol

…became known not only for its soil
and plentiful game but also for its smell.

Cesspools were created and filled with “urine, feces, apple skins and cores, /animal remnants from the tannery…” (“Laguna as Sebastopol’s Sewer, Beginning in 1906” 52). Time brought also the internment camps of World War II, mournfully commemorated in one of the book’s most haunting poems, “There Lies the Thing I Most Desire,” dedicated to “the Furosho family”; “there is / no wind here,” the poem’s speaker declares from the camp, “strong enough to carry my prayers back to our temple Enmanji” (35).

The emotional heart of this book, for me, lies in its third section, “Sweet Odysseus: Early Settler,” written in the voice of an imaginary woman who comes West with her husband in the nineteenth century to “the house of yearning” where “always there was an orchard and a garden” (“This Is the House of Yearning” 61). After her husband is killed in a tunnel collapse, she remains on the land with her baby, Joe. The sequence of poems traces the years, the growth of the child, the labor to create and maintain the orchards, the woman’s lingering grief for her husband, her fierce love for the land—the fog, the hawks and blue jays, oaks and pines—and her joy, each harvest, at an exhausting job well done.

Ann Fisher-Wirth‘s fourth book of poems is Dream Cabinet (Wings Press 2012). She is coeditor of the groundbreaking Ecopoetry Anthology (Trinity UP 2013). Her current project is a poetry/photography collaboration with the Delta photographer Maude Schuyler Clay, forthcoming from Wings Press in 2017. Ann teaches at the University of Mississippi, where she also directs the minor in Environmental Studies.