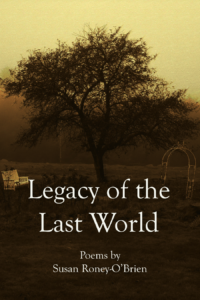 Susan Roney-O’Brien, a poet and teacher, won first place in the Worcester County Poetry Association contest, judged by Mary Oliver, and was voted Poet of the Year by the New England Association of Teachers of English. Her chapbook, Farmwife, won the William & Kingman Page Poetry Book Award. Her work can be found in the Beloit Poetry Journal, Prairie Schooner, Diner, Ekphrasis, Stillwater Review, Block Island Poetry, and many other literary magazines.

Legacy of the Last World is divided into three numbered sections.

Section I consists of twenty-one poems. The overwhelming feeling is of a love song, one that is sung to the earth, and life in small, odd moments easily overlooked. It is the pause that elevates the ordinary moment into the sublime, the appreciation of the sacredness of this very instant.

Roney-O’Brien weaves poems reimagining Eve and the Garden of Eden throughout all three sections, and these poems were among my favorites. For example, in “Afterwards,” Eve is earthy and sensual. The voice is accessible, clear and poignant:

The path of Adam’s touch on the skin of a pear
left a trail of scent so rich I could taste
the salt on his hands
when placing the fruit in my mouth. (16)

Roney-O’Brien’s Eve transcends religious tradition as the reader inhabits Eve’s mind and body, her nature revealed in the small details.

This wonder for the most miniscule of sensations is further explored in “Stereognosis” when a winged creature, either a butterfly or moth, walks across the narrator’s hand. Roney-O’Brien slows time down to a crawl.

The question is not
whether the delicate footsteps are those
of butterfly or moth, but
more simply said, why such a creature
would choose the walk
and in its choosing
bless me to walk upon. (29)

The second section of Legacy of the Last World consists of twenty-three poems. It begins with the casting out of Eden—not as a loss of paradise, but as a love story between Adam and Eve.
The collection moves into darker themes: illness, water scarcity, broken trees and broken limbs of poets. As the section moves into darkness, there is a poem about actually sitting in the dark as children grow older. The narrator speaks of her own aging body, the need to kill insects to save trees, and a student’s suicide attempt, narrowly thwarted.

The poem from this section that lingered the longest for me was “In the Trauma Waiting Area” (76-78). As someone who has sat in such a waiting room, I felt Roney-O’Brien really captured the feeling in her lines, “The trauma waiting room swells/ and drains all day—grief/drags through the plain blue door […]” (77).
The third and final section of twenty-five poems begins in darkness. Roney-O’Brien again starts with the reimagined Eve in “First Questions”:

Is decay, then, essential, and is death a making
room, a step through the mouth of time? Must I,
to make myself new, peel back and peer through
a skin no longer mine? (87)

The poems continue the theme of despair: the deaths of children, a holocaust poem, dead snakes, and dead neighbors. But then the poems move slowly toward hope, God, the beauty of the animals of the earth, spring. It is as if the pages lightened the closer we get to the end, as we are once again immersed in the natural world where everything is holy.

What really struck me was how Roney O’Brien ordered the work, so that the book becomes a cohesive whole, instead of merely a collection of poetry on similar themes. There is a real feeling of movement, a cycling that echoes the life cycle and the seasons, without blatantly stating it as such. Rather, each poem builds on the last, creating a sense of a rolling circle, but one that ends in a higher place than it began.

Lara Lillibridge was a finalist for Black Warrior Review’s 2016 Prose Contest, and a top-5 finalist for DisQuiet’s 2016 literary prize in nonfiction. Her work has appeared in Hippocampus, Luna Luna, Huffington Post, and many others. She holds a MFA from West Virginia Wesleyan College.