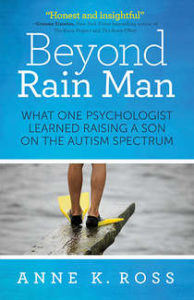 I was drained, depleted, tired of carrying loads of emotional laundry around. I wanted to sleep deeply. We were not doing well, our little Asperger’s family in its tiny house…we were all now in the steam cooker, and it seemed the pressure would blow off the roof. (136)


Dr. Darold A Treffert, MD, a clinical professor at the University of Wisconsin Medical School, said this of the 1988 movie “Rain Man”: “Few disabilities will ever experience the kind of massive public awareness in such an empathic, uniformly well received and popular format that Rain Man has afforded autism and Savant Syndrome.” And yet, as Beyond Rain Man author Anne K Ross points outs, while the movie was hugely instrumental in bringing autism and Savant Syndrome into the public conversation, it didn’t come close to providing a modern-day blueprint for autism. And it certainly doesn’t begin to tell the complicated story of mothering a child on the spectrum.

Beyond Rain Main charts life—the good, the bad and the downright scary—for the entire Ross family: Anne; her partner Patty; their youngest child, Spencer; and the oldest boy, Matt. All four lives are affected by Matt’s Asperger’s Syndrome diagnosis.

Ross employs a winning blend of hard fact and “heart” to tell this story. Throughout, footnotes help with those facts by explaining terms and by providing medical background and statistics. Within these footnotes and the chapters that handle the science of autism in general and Asperger’s Syndrome in particular, we meet Ross the PhD in Clinical Psychology and Ross the on-the-ground School Psychologist. Here, she is at pains to show us the complexity of this Syndrome at both the neurological and the situational level. For example, she hands over the meaning and impact of “sensory integration dysfunction” and how this manifests in her son’s regular meltdowns in the face of irritating tags in clothes, new foods, and family get-togethers (29). She shares studies that consider the link between the presence of certain proteins and “obsessive and repetitive behaviors” (42). She explains the vagaries of insurance cover for autism-related therapies (88), the California Educational Code (142), and the research undertaken by Garcia-Winner and Baron-Cohen that resulted in the adoption of a common language allowing children on the spectrum to better “regulate their emotions and behavior” (155).

And then there’s the “heart”: Ross is always a mother first. She obsesses over Asperger’s possible hereditary link, wondering about her own family, about their quirkiness, their need for neatness and order (126). She is continually looking for answers, for ways to help her son cope with the world within which he must operate. She finds parallels with her own and with Matt’s way of dealing with this world: they share a dislike for scratchy and tight clothing, a tendency to say too much (77), an obsessiveness about work, and a general lack of balance (her imbalance, she says, is  “driven by a not-so-mysterious force” which is, of course, the drive to improve the lives of the kids she works with and the life of her own son), and tantrum-like struggles with frustration and anger (116).

She is unflinchingly honest. Ross lets us, the reader, into all the spaces in her life. We see her as a mother, desperate to parent both her boys, each with his unique needs. We see her as a partner to Patty—in the good times and the bad. We see her in her work as a school psychologist, delivering news to parents: hand-delivering truth every time and hope whenever she can.

When I first read Beyond Rain Man, I took “reviewer notes,” marking pages with Post-Its™ and underlining passages that handed over the meat of a moment. But after just a few chapters, I picked up an orange highlighter. I marked words, lines, sometimes entire paragraphs…not just because they were strong and memorable, but because they seemed to be talking about me: my fascination with square windows and the need to line up the horizon perfectly between their panes; my tendency to walk on my toes as a child; my inclination to over-share and to ask questions on top of questions; how I love even now to be swaddled, turning and turning in my bed until the comforter is wrapped tight around me. Was I too on this spectrum? In chapter fifteen (aptly titled “Toward Peace and Understanding,”) I found my answer in a conversation between Ross and her therapist:

I joked about my own autism kicking in, and our therapist suggested that maybe we’re all on the autism spectrum, just in different spots. I liked that idea. We’re not truly diagnosable, but maybe from time to time we move around on that spectrum—sometimes pulling away from people, going deeper into our autism, sometimes pushing back into the world. (185)

Beyond Rain Man documents one woman’s determination to handle the pulling and the pushing that motherhood demands. I came away with a renewed respect for all mothers, but particularly for those who parent challenging children, because for those mothers, all that pulling and pushing requires (and builds) the kind of emotional muscle I can only ever dream of having.

Bunny Goodjohn, originally from the UK, is the Book Review Editor at Mom Egg Review. She is the author of two novels, Sticklebacks And Snow Globes (Permanent Press 2007) and The Beginning Things (Underground Voices 2015). Her first poetry collection, Bone Song was published in May 2015. She directs the Writing Program at Randolph College in Virginia.www.bunnygoodjohn.com