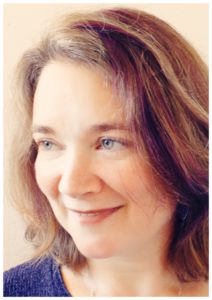 The structure of We are Traveling Through Dark at Tremendous Speeds creates an odd and interesting experience for the reader—we encounter chapter and verse of a life of emotional stops and starts, domestic rituals and rites of passage, while a continued narrative whispers along the bottom of the page to the end of the book. It is almost as if Sarah Sadie is poet and docent/chorus, living and reimagining the mythic and intimate moments of her life. Her work plays with our sense of time, and the words we use to express love, regret, domestic bliss, and the wistful loss of wild youth.

Each event of each poem possesses a sly theatricality, small dramas summoned by memory, or the conundrums of motherhood, particularly the passage of time. In “Seven Acorns Saved Too Long” we see the poet and her children on a summer camping trip, beautifully detailed and cautious in its discoveries:

These meant to mark a walk late last summer, our annual
only camping trip, my trotting daughter singing
through sun-spilled deciduous, my son on his scooter kicking ahead
and doubling back. So fast, I go so fast.
Below us a river wanders.

Further along, in poem and season, the poet writes, “Just two ways I know to slow time down. Hold it/in amber or weave it in rough green tapestries…” The acorns, or markers, can’t stop a certain future—“Did I think there was magic in these?”—and she tosses them, even as the image of her son is “wheeling back again, to ask if we saw,/that time, how fast he was going.”

Some of the most eloquent language and poignant moments occur in poems that focus on a domestic tableau. “The truest love/is an argument, holding on hard and pulling against” we are told in “Love Does Call Us to the Things of This World,” where the day affectionately begins with an urgent announcement: “This morning love opened the bedroom door/to tell me my son spilled candlewax on the carpet/and do I know how to get that out?” A meditation of laundry personifies linens and underwear in “Folding the Clothes:”

Pants meet themselves
and quiet down nicely. Underwear
resigns itself, socks domesticate, and the shirts,
well, the shirts get wrinkled.

They’ll have plenty of time to relax
dreaming through hours a rumor of buttons.

Sadie also gives homage to antiquity and the conceit of mythic grandeur in modern Empire. In “The Girl the Gods Let Go” after bemoaning rejection despite practiced feminine gestures (“…my sighs of alarm, gasps of delight,/I trailed my fingers through the water/just so, and sent fleet glances…”) the narrator succumbs to the suburban Good Life and is haunted by her vamping days:

So I delivered myself at last to minivans
and pool parties you never dreamt.
Four kids and a successful spouse, a dog
and all was well, more or less, until
I found my golden corset in the closet,
long buried, and, curious, I tried it on.

It rings as part exultation and part surrender when the poet writes, “I sing down time and all the ravages,/a wild, watering, embrace the mud/Byzantium was built upon, eternal/ slurry that was always there…” (“Byzantium at the Bus Stop, Byzantium at the Mall”). In “Stretch Marks” the legendary coupling of Odysseus and Penelope are juxtaposed with the narrator and her husband whose own romance defies the effects of living and age—“This body is stretchmarked/ from my shoulders to my knees,/as though a thousand pearl-eyed fish/shivered kisses as I surfaced/through time’s suck and whinge.”

Ultimately, We are Traveling…, with its various narratives and occasional maxims (italicized statements scattered throughout the book’s pages) takes the reader on a journey through poems that allow us to “catch what light we can these flawed, mosaic days.”