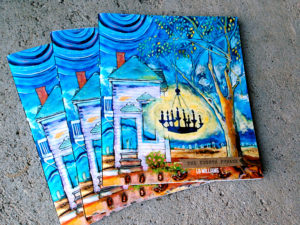 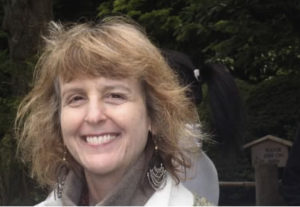 – One of the things that is delightfully deceptive about L.B. Williams’s chapbook, The Eighth Phrase, is how it plays with appearances: urban landscapes, family gatherings, the crouched hiding places of youth and the immense and unforgiving territory of memory. Another is the diminutive format of these sixteen poems, mostly titled and all numbered, tucked into a square booklet with a bright cover and curious illustration that itself defies easy explanation (a glowing chandelier hanging from a tree with a ghost-like house and graveyard subtly dotting the horizon) and is called “Homes for the Displaced.” It was created by Angie Reed Gardener, a second-generation narrative painter from Kentucky, and I mention it because as one reads The Eighth Phrase one moves through the exteriors and interiors of the poet’s rites of passage that mingle and intersect in emotional fragments.

In poem number 2, “At Sixteen,” adolescence seeks an elusive moral compass, the adult world viewed from just beneath the purposeful stride of commuters even as our country’s leadership wavers:

We sit in Grand Central Station on the floor
legs crossed at 10pm beneath the large clock.

and me and Eric, listening to their black shoes
clicking softly on tiles.

There is an interesting tension and juxtaposition of street scenes and quiet enclaves, noise welling up from the underground into a child’s room, as in poem number 5, where

down second ave
by subway worker
in yellow helmets,
by gray wood structures
separating
ditches of men drilling,
their explosives many evenings
ka-banging
the silence of a boy
in his room humming
while doing his algebra.

In poem number 4, “Unreal City,” an affectionate gesture in dreary surroundings leads to persistence. The poem is also a study of visual contrasts: “Windows yellow soaked in sunken fog/ Downstairs a woman in a black coat/ dark sunglasses leaves food for the pigeons./ On white walls they enter.” The poet must “knock the screen” to rid the pigeons, who manage to “lay eggs of desire/nuzzle up to brown fog rising.”

A series of haunted moments occurs, and the speaker’s parents (particularly the father) linger like acolytes in familiar places and on innocent occasions, summoning uncomfortable truths. In poem number 8, “Visitation,” the white-haired ice cream truck vendor “…takes me back to my father,// when a woman walked/ above him/ in high heels/ until he took his broom,/ dented the ceiling/ with his rage,/ drove a white pinto/ obsessed with money/ he did not make.” Poem number 9, “At Thirteen,” evokes the wilted façade of a last Thanksgiving dinner held at a delicatessen, the gleaming bustle of the restaurant exacerbating the dissolution of the speaker’s family: “The hot open turkey sandwich/ with runny mashed potatoes,/ brown sauce dipped into it/ is a liquidy mess./The waiters whisk by in black pants, golden jackets,/ dropping pickles off in aluminum bowls.”

Youthful lust and desire is also given its due (number 11, “Kings Point Specialty”) and sometimes intermingles with the deadened yearning of adults (number 6, number 12).

Even as we grow up and older, away from adolescent angst and ego, our consciousness continues to play hide and seek with our most vulnerable secrets, embedded as markers on the journey to our discovered and surviving selves.