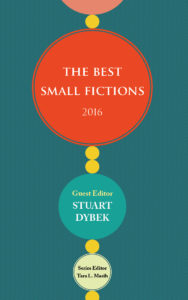 – I’m rather new to the world of small fiction (also known as flash fiction, micro fiction, short shorts, sudden fiction, quick fiction—and there may be more names that I’ve yet to run across). As an established literary genre, however, small fiction is still fairly new itself; this is only the second year that it has had its own “best-of” anthology. Nevertheless, this collection features an international crowd of much-published and much-awarded authors, and it feels absolutely packed with material, even though the forty-five stories included would amount to fewer than a hundred pages in the absence of biographical notes. Women writers are well represented in the collection, having contributed more than half of the selections, and a surprising number of the stories hinge either on pregnancies or on mothers who are absent, ill, bereaved or struggling.

Small fictions walk fine lines. Some of these pieces are closer to poetry than they are to short stories. Take, for instance, Michael Martone’s “In the Ditch, Minnesota I-35, a Biologist of the Twin Cities Ecological Field Office, Fish & Wildlife Service, Plants Milkweed, Asclepias Meadii, a Threatened Species”: “This toxic meal ticket for caterpillar, Danaus plexippus. This poisoned highway we’re planting to Mexico. This desert crowned by barbed fire, depleted Monarchs hoboing south” (33). Yes, those twenty-five words comprise the full text of the story, the title of which is an equivalent length. These tiny texts are so tightly woven that it’s difficult to lift a single choice sentence without lifting some of the material that surrounds it, and by that point, it feels like giving away the whole story.

Not giving anything away is crucial to the enjoyment of small fictions. These stories often rely on the impact of the unexpected or on building tension that the reader can feel, if not fully understand. This is a delicate operation in little space; a writer can quickly find herself at the edge of a cliff, and then there’s some danger of going over the edge. Mary-Jane Holmes’ “Trifle,” a story of a soldier’s homecoming from the Middle East, draws us to the edge with such subtlety that we hardly notice. It’s gently balanced with graceful, measured prose and an insistent mundaneness that’s more powerful than any forced drama.

Curtis Smith’s “Illusion” is a similarly moving family story, quiet but cumulatively powerful. It manages to give the reader the feel of California in the golden age of Hollywood—the wider landscape of the place as well as the enclosed world of the studio (complete with “a clan of loincloth-clad cavemen playing poker beneath an elderberry tree”)—and the sweetly strained lives of two parents and a child that we can truly care about (71).

Short fictions may run the risk of feeling like a quick lead-up to a punch line, but there is some delicious humor to be savored in these stories, humor that’s rich and satisfying and fully integral. Amelia Gray’s “These Are the Fables” is a crazy collision of the real and surreal, showing us Dunkin Donuts and the Days Inn like we’ve never seen them before. It explores the theme of personal mythologies in a way that’s at once hysterical and serious. My very favorite story, Elizabeth Morton’s “Parting,” works out the title through a simple but clever conceit from first sentence to last, painting a brilliantly absurd picture of divorce from a child’s perspective. The final selection, Etgar Keret’s “The Story, Victorious,” is a perfect closer for a best-of anthology, insofar as it’s a playful, metatextual send-up of authorial triumphalism—not to mention nationalism, politics, advertising, our faith in anything that claims to be scientific, and the global epidemic of pandering.

The book is nicely structured, with biographical notes following each story so that the reader is spared the bother of flipping back and forth to an appendix. These notes also function as a palate cleanser, so that the reader can reset between pieces. An informative foreword explains the history of the anthology and the nomination and selection process, an amusing introduction from guest editor Stuart Dybek primes us for what’s to come, and concluding interviews with a featured press and a featured author provide additional perspective on how this kind of art is made. There are so many voices here, taking us to so many different places, every reader should find favorites in this year’s edition of The Best Small Fictions.