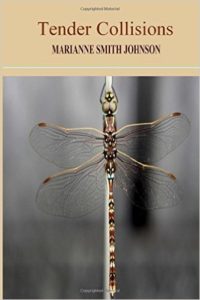 – Marianne Smith Johnson’s collection Tender Collisions is a rollercoaster of the loss, grief, joy, and love we experience every day. It pulls the reader out of the routine of daily life to remind her that life is fragile, and the human body breaks easily. The collection is divided into three stunning parts tied together thematically by the need for justice.

Johnson brilliantly exposes the reader to the intimacy of daily life as a wife and mother. A private moment between spouses is lit up in “Duende Teases up the Night” through Johnson’s description of sounds: “When gods speak, brush burns the desert. / I hear the razor draw across your dawn-wrinkled chin — / If I loved you less I could talk about it more” (14). The way that Johnson links love to the natural world reminds me that love is natural, powerful, and transcendent. In “The Backstop at Age 8,” Johnson gives the reader a peek into motherhood by describing the way a mother knows her child

This description of knowing a child from pregnancy is luscious with detail and allows the reader to connect with experience of motherhood. The way love is conveyed in this poem makes certain poems later in the collection, which deal deaths of children, more poignant such as “Nine Feet East of Roadway Edge: One Shoe”

The children knew
where to place the roadside flowers, Bright balloons
would leak like lungs, unlike a heart exploding
in a chest, a brain bursting in a skull, a breast
engorged and spurting with a baby’s cry. (29)

Having such a tender description of motherhood earlier in the collection makes this heart-wrenching poem more powerful as the reader contemplates the distress and devastation this child’s mother would endure.

Johnson’s writing provides the reader with a sober reminder of the power of loss. The opportunities and experiences a person could have die along with them, which Johnson eloquently touches on in “Elegy for a Third Grader.” This poem tells the story of a nine-year-old boy’s death at the hands of his father who was driving drunk:

Math in the morning,
reading after recess,
the solar system
after Mama’s cheese
sandwich and milk. Space
captured him, the spin of planets
circling the sun without colliding
seemed impossible, he wanted
to see it for himself someday. (51)

The boy in this poem has things he wants to see “for himself someday.” His entire future perishes when he does, and the things in life he looks forward to are just out of reach. Johnson’s writing in this stanza, particularly her use of short lines, mimics the way a child would think and makes it impossible for me not to connect to him.

Marianne Smith Johnson does not pull away from the horrors she describes, nor does she show them in a sentimental light. Johnson is the voice of justice for these victims who would have been left behind.

Christina Mock was born in Texas. Her work has been published in About Place Journal, Cabildo Quarterly, Stonecoast Lines, and Red Rock Review. She holds an MFA from the University of Southern Maine and is currently teaching in Texas.