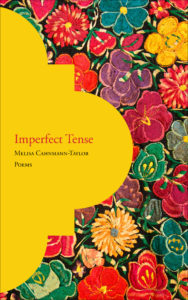 – Wisdom, wit, and compassion characterize Melisa Cahnmann-Taylor’s first book of poems, Imperfect Tense. A Professor of TESOL and World Languages Education at the University of Georgia, she charts her extensive terrain in the book’s first poem, “Whorfian Hypothesis”—which, as a note explains, asserts that “one’s language determines one’s conception of the world” (115). The engaging poems of the book’s first section, “Imperfect Tense,” grew from a Fulbright in Oaxaca during which the poet interviewed Americans tackling Spanish as a second language. Here are befuddled ex-pats who say “I’m pregnant” when they mean “I’m embarrassed” or “fuck a bus” for “catch a bus” (15); here’s the poet’s little son first learning Spanish, delighted to discover that “to be” rhymes with “to vomit” and “to sneeze” (20); here are several success stories of ex-pats who adapt and love it, but here too, ruefully, is Anika, who announces, “French gets easier. Kiswahili gets easier. I don’t think that way about Spanish” (27).

The second section of the book, “Past Tense,” moves farther afield with a number of poems drawn from Cahnmann-Taylor’s extensive travels, and a number drawn from her many years’ experience teaching in the United States. Of these, particularly moving are “A Taste of War / June 2006,” about a trip with her new husband to Croatia fifteen years after the civil war—

We drove to this border
to hike Croatia’s parks, lodge where grasses and small
trees recovered but what do the old women remember….?  (48)

as well as the open-form “Georgia Horizontal” (56-58), and several poems about the poet’s Jewish identity, including the beautiful, semi-found poem “Mordecai Sheftall’s Letter to His Mother, 1812 Savannah, GA,” about his arrival in the New World:

And finally, in the book’s final section, “Ever Present Tense,” Melisa Cahnmann-Taylor turns to her own private life—to childhood, marriage, motherhood. A particularly strong group of poems addresses her mother’s chronic suffering and Vicodin addiction, the child’s hunger for love, and the adult woman’s adjustment to her mother’s death. “Clumps of kitty litter,” she writes in “Vicodin Poem #1,” “stolen grocery / cart under the laundry chute, used / sofas and chairs, we inherit // the discarded” (78). And, in “Vicodin Poem #2,”

The Insight Meditation leader says to name your feelings.
Car rides with my mother: is that a feeling?
Naming and holding herself one part at a time.
Stomach stomach stomach and neck neck neck. (85)


But despite the suffering these poems express, Imperfect Tense is, finally, a warm and generous book. Loss may be ever present, but so is ebullience, as in the very funny sestina “Workshop Advice: Take the Guru Out” (80-81). So is the “hearty gut laughter” of the poet’s baby son, transfixed by a bigger boy hitting a helium balloon (105). And so are self-acceptance and self-nurturing, as in the quietly radiant poem about the loved self’s capacity for healing, “Fathers”:

My fathers live
Inside me, ask: how am I?
Could I use any help? When I strike
and miss they’re there, bringing me
water. My fathers say
there’s a next time. And because
they’re so often right, I
believe them. (97) 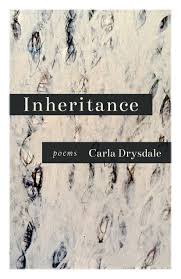 Carla Drysdale’s chapbook Inheritance covers partly similar terrain. Like Cahnmann-Taylor, she has traveled widely, is married, and has two small children, and as with Imperfect Tense, these various life experiences enter the work. But Drysdale’s poems are much darker—and no wonder, for in this chapbook she explores the shaky inheritance of her parents’ divorce; her stepfather’s sexual abuse; her mother’s retreat into “Valium numbness” (1), first, and then her mother’s abandonment; and her own premarital promiscuity. “It was always worth it,” she writes of her attempts to find momentary fullness. “Even if I was used and rejected” (10).

Inheritance, though, is concerned not only with exposure, but also with understanding and even, perhaps, eventually, forgiveness. Before forgiveness, ideally, would come truthful confrontation, and that is not completely possible. In a wry understatement Drysdale writes, “There are childhood facts I’d like to check, / but the past is unpopular // with my mother” (1)—and therefore, when her mother comes to visit, a breach remains:

Turning,
I catch my mother
looking at me, into me,
as if the lamp-lit moment itself
could reveal to her
who I am and where I’ve gone.
I pretend not to notice,
turn and rinse another glass. (21)

The father, too, longs for closeness with his daughter, “tries / to recapture lost time, talking to me / about his life and loneliness,” but as she says, “I can’t remember my mother and him / ever being together” (27).

Too much has been lost for complete reconciliation, especially since the parents have visited the poet where she lives in France only “a handful” of times (28). But by the present tense of these poems, as Drysdale writes:

The old sorrow—
the one that won’t go away
…
has become a blind dog now
its snout resting on its paws.
Rilke said the dragons of fear
really just want our love. (13)

And so, extraordinarily, the poems try to offer love. Addressing the stepfather, Ray, Drysdale adverts to her bitter past—“Back then I was ten. I was your goods. I lost that fight”—but in a beautiful reversal, ends the poem in this way:

Did anyone ever feel sorry for you?
I wish to surrender my right to avenge
for the sake of my children becoming men. (5)

Inheritance ends with Rafael, the poet’s tiny son named for “the healing archangel,” sitting on her lap to look at pictures of her parents and asking, “So gently, so gently,” “’Do you still love them?’” She tells us, “I’m silent, because it’s hard to explain” (28).

Ann Fisher-Wirth’s fourth book of poems is Dream Cabinet (Wings Press 2012). Her other books of poems are Carta Marina, Blue Window, and Five Terraces. With Laura-Gray Street, she coedited the groundbreaking Ecopoetry Anthology (Trinity UP, 2013, 2014). Her current project is a poetry/photography collaboration with Maude Schuyler Clay titled Mississippi. She teaches at the University of Mississippi, where she also directs the Minor in Environmental Studies, and she teaches yoga at Southern Star in Oxford.