The Best Literary Writing About Mothers and Motherhood
You are at:Home»Reviews»Book Reviews»Tremolo by Kelly Hansen Maher 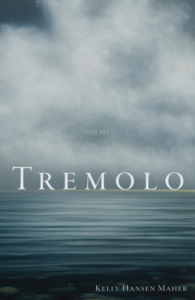 – Is it possible for poetry to transcend grief? Can a visceral reaction in the body be expressed in language? In this debut poetry collection, Kelly Hansen Maher vacillates between an original vocabulary of loss— they needed a mother to bundle them/needed the fine thread of my alphabet (13) —and poems that are resounding cries, her own answer to a trauma so great that the doctors lost count. The poem “Loon Calls, Variations for Winifred” unfolds with the word wail and moves to orinthologists say it is a call for contact/canoeists think, not without sorrow (20). This ability to speak in hush and shudder shows the mother walking from the hospital in one poem with that pearled, mammal spine/still inside me, still my expected (p. 29). These are images the reader can feel as well as read.

There is a violence to some of these poems: Some female in the nest of her yodel,/hollering , fuck off, hollering, come get me,/this call, this call, I’ll kill you for what’s mine (32). In the aftermath of repeated miscarriages and one living daughter, the poems become a tribute to a broken lineage. Each poem is an assertion that conception itself is a chance event and its progression to live birth, a possibility but never a certainty. The poem “tremolo”establishes Hansen Maher as a poet of image, as she reaches into craft for answers: how does a loon experience memory? (36) and later there is no ocean   there is no ocean / there is only ocean   there is only ocean (37).  The loon wails to hear itself/to etch its bright fluency into the cold and not be done (38).

Hansen Maher creates a portfolio of cells (42) that may not be realized in this world but is transformative in the world of poetry. The unborn have a voice, a color, a melody. They are conjured in loons, water, crows, and in an exquisite memoir poem without pronouns; ‘s had warm blonde hair, the jar/was nested with grass and leaf, was never meant to be a killing jar (72). One child, named Winifred was full-term but no site for me to go to mourn her (78).


This collection resoundingly establishes Hansen Maher as an exciting new voice. Her poems flail and rend but also honor every stage of living as well as the mystery of that fine thread that separates us from the other side.

Lisa C. Taylor, graduate of the Stonecoast MFA program, is the author of four collections of poetry, most recently Necessary Silence (Arlen House/Syracuse University Press). Her debut collection of short stories, Growing a New Tail, was published in 2015. Her fiction and poetry have been nominated for the Pushcart Prize and she received the Hugo House New Works Fiction Award in 2015. Lisa teaches writing at Nichols College.