The Best Literary Writing About Mothers and Motherhood
You are at:Home»Curated»Kristin Prevallet - Change»Cricket Sounding Darkness by May Joseph 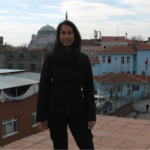 An abandoned house with red tiled roof in decay rises across the small hill. It appears so much smaller, innocuous, from how I remember it. It is my mother’s childhood home in Quilt, Kerala. Once a sprawling home with a lush courtyard and the sounds of a large family, the crumbling ruin is now desolate, silent. Its melancholic aura betrays deep neglect. My mother stands with me outside the padlocked gates and murmurs in sadness that it is now filled with snakes, this place of her childhood, that she so deeply loves. I peer across the wall to catch more of a sense of this wondrous, difficult place I spent much of my early childhood holidays. At the core of my memory is an image of me at dusk, squatting on the stone front porch with my grandmother. I am three years old. Grandmother, or Mama as we called her, is boiling a pot of water on a stone hearth with coals. The smell of ash fills the air. I loved this unfamiliar, acrid smell – it captured something visceral, tactile, about visiting my grandparents in Quilon, India, from Dar-es-salaam, Tanzania, in the 1960s. The stone hearth was the metaphoric kitchen table for me. Though the larger, always plentiful, kitchen table was a stolid grounded connector for the extended family of nine children and their families. Around the stone hearth in twilight, Grandma would boil water, and ash would flicker in the sweltering heat of the night. So many twinkling stars floating, shimmering in the cricket sounding darkness.