The Best Literary Writing About Mothers and Motherhood
You are at:Home»Features»Gallery»Minna Dubin – Momlists

– I am interested in using art to challenge people to think critically about cultural mythologies embedded in our everyday lives. I take familiar things—baseball games or cuddling with a child—and pry them open, look for truths (often my own) that people prefer stay quiet. Writing for me is about careful noticing and reporting back.

In March 2015, 2 years after giving birth, I began #MomLists—a guerrilla public art project in the Bay Area, consisting of 150 handwritten lists about my early motherhood experiences—to try to make sense of (and peace with) my new “Mom” identity. Motherhood can feel isolating. Our modern-day connector—social media—is a barrage of happy mom-and-tot selfies. I am not living that picturesque motherhood life, and my suspicion is: neither is anyone else. In search of an alternative motherhood narrative, #MomLists lifts the societal surface of motherhood and exposes a messier, more resonant truth.

#MomLists adds to conversations about motherhood by expressing feelings most moms don’t talk about in a public way. I write about new rage bubbling inside of me (fists pounding thighs), about feeling overwhelmed by how much I am needed, and about the physical pleasure I get from my son’s delicious, little body.

The writing is personal and also universal. This is clear in the conversations #MomLists stirs online. The project title, stamped at the bottom of each list, contains a hashtag to suggest: “This is a conversation. Go online, join in!” Each time I post a list in the real world, I also post it on Tumblr, Twitter, Instagram, and Facebook. Moms reshare the posts and even contribute their own lists or make list requests.

Each list is handwritten on a 4×6 card. A layer of bright decorative paper is placed on top and the two papers are sewn together across the top. The act of making—cutting, sewing, hand writing, stamping—then feeling the tangible, finished product in my hands is a relief. Each piece is a clearly laid-out goal—the opposite of the uncertain nature of raising a child. The lists dangle from ribbons in public spaces (coffee shops, laundromats, community centers) looking like flattened gift bags, waiting for strangers to stumble upon them. #MomLists requires interaction. Readers must lift the pretty exterior to access the gritty, vulnerable list underneath.

The project completed the first run of 50 pieces in Berkeley the Summer of 2015. I’m currently halfway through the next 50 in Oakland. The final 50 in San Francisco will begin being posted in Spring/Summer 2016. 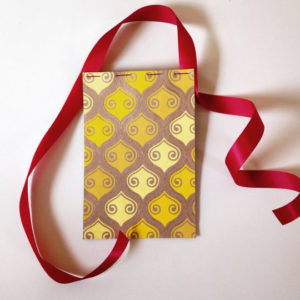 Things That Have Increased

Things That Have Decreased 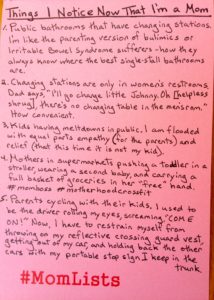 Things I Notice Now That I’m a Mom 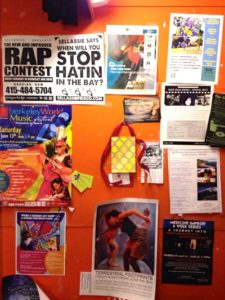 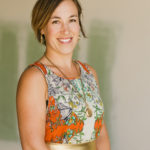 Minna Dubin is a writer, public artist, and teaching artist in the Bay Area. After having a baby in 2012 and experiencing a tough transition into motherhood, Minna began writing lists in order to understand, laugh at, and make sense of her struggles in early motherhood. Minna’s latest projects have attempted to make writing “louder” by turning it into public art and stirring up community dialogue.
Photo of Minna Dubin by Andria Lo.