The Best Literary Writing About Mothers and Motherhood
You are at:Home»Reviews»Book Reviews»Growing a New Tail by Lisa C. Taylor 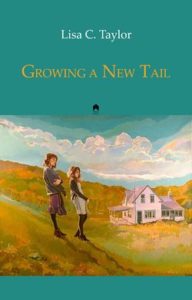 – Lisa C. Taylor’s Growing A New Tail contends with moments of rupture, when the past is upended and the future reinvented.  These eighteen stories are short, lyrical meditations.  Backstories are important but offered with realistic economy.  Disease, death, and heartbreak are catalogued with matter-of-fact distance as we are here to witness the implosive aftermath.  As Elsa says in “Visible Wounds,” the opening story, “The place where they cut her throbbed with knowledge that skin acquires when it is sliced open, must grow a hood to heal” (11).  Restoration to pre-wounded life is impossible; yet, protagonists hope for nothing less than transformation, as Elsa acknowledges, “We’re all becoming something else”(11)

In “Visible Wounds,” Elsa is travelling to the funeral of Linh, her mother’s friend.  Linh’s son, Patrick X. O’Rourke, has come to pick up Elsa from the hotel.  Elsa hasn’t seen him since childhood, and muses over whether he has come to take her to the funeral or to rape her.  He is an anonymous possibility: either a compassionate envoy or a sexual predator.  Elsa refers to the tattoo on his wrist, as a “visible wound(s)” (12).  She is shell shocked by the wounds she carries: the painful surgical incision; her divorce and loneliness; and her relatives obliterated in the Holocaust.  Stability and self-knowledge are undermined by a past compromised by pain.  In the final scene, Elsa, at a precipice, is about to meet Patrick but is uncertain if he will appear.  She opens the doors of the bar, in a moment of suspended revelation, and steps forward, saying, “Sometimes what you believe you can change” (17).

The stories in Growing A New Tail, circle around these two themes in “Visible Wounds”: we are all becoming something else, and what we believe we can change.  Pop-psychology promulgates a belief in positive thinking, and self-reinvention as active, responsive karma.  However, many of the characters here are disappointed by their imaginative efforts.  In “Monuments,” the narrator, decimated by the loss of her child, only sees a future that begins and ends with her daughter’s death.  In “Narrow Paths Somewhere,” Fiona flirts with a long-ago love; when she finally leaves her husband to find him, it is not her idealized escape.  In “Good Heart,” Horace, a lonely widower, offers to take in a troubled woman which leads to unanticipated consequences.  Good hearts are always broken.  In “Five Percent,” Jo remembers her childhood cat, Minx who was once stuck in a hemlock tree.  Despite being saved, her mother put the cat down two months later because it was “untrainable” (20).  Salvation is only a reprieve, and unlike Elsa suspended in eager anticipation as the doors open, Jo tells us, “Some days it’s possible to open a door and the person you most want to see will be standing there.  But it’s just as easy to wake up in the middle of the night with your father dressed in plaid pajamas, reeking of gin” (22).

Taylor, to great effect, makes use of the unreliable narrator.  In “Growing A New Tail,” Anna describes her husband Clem as someone who “doesn’t believe in anything but fate”; in comparison, Tim, the man she is planning to run away with, leaves nothing to fate.  As Anna understands, we “define ourselves by what we lacked” (54).  “soulmates4ever” is told from the self-justifying perspective of a stalker intent on convincing his audience that stalking is only “checking up” and indicative of real love (81).  In “Asymmetry,” Philomena visits with Madame Indigo, a fortune teller, to find out if her dead husband left any hidden assets. In “Earthly Top Note,” the narrator, Matt, reflecting on married life with Elena and on the sacrifices he’s made to keep her happy, is not as he appears.  And in the final story, “Leash Laws,” Carol, confined to a psychiatric facility, believes she is a tree.  Human language is reduced to an indecipherable “click, clack, click” (150).  The story ends in ambivalent, psychotic liberation: Carol is running from her daughter into the trees, hearing gibberish, speaking gibberish, and welcoming disintegration.

Psychotics, clairvoyants, stalkers, widowers, parents of missing children, parents of dead children, children of dead parents.  Narrators expect disaster and misfortune in this collection.  Della, in “Storm” states, “I always thought I’d die a violent death…” (71).  Yet, despite this pessimistic prescience, (the matter-of-fact wrangling characters do to stay on the surface of their messy lives), lives “might depend on forgetting” (61), Taylor asks her characters to continue opening doors and trusting in imaginative possibilities because “desire churns and we go forward” (50).

Kerry Neville is the author of the short fiction collection, Necessary Lies, winner of the Sharat Chandra Award.  She received the Dallas Museum of Arts, “Arts and Letters Live,” Fiction Prize, and the Texas Institute of Letters Short Story Prize.  Her fictions and essays have appeared in many journals.