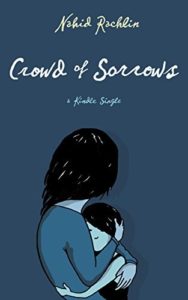 – “‘As the air grew darker a sudden sense of doom crept into the conversation, all the danger surrounding the children….Yes, danger traps were everywhere” (11).

CROWD OF SORROWS, the latest work of fiction from Nahid Rachlin (author of the the memoir PERSIAN GIRLS: Tarcher ‘07), takes an apartment complex in Cambridge, Massachusetts as its setting, and a community of women as its characters—the community’s main players being Zora and her young daughter Anar.

Zora has recently separated from her husband Martin, who wastes no time in installing a girlfriend into the old marital home in Quincy, MA. Meanwhile, Zora and her daughter move into a duplex in The Orchard Apartment Complex where she hopes to sort out her feelings for both her husband and her marriage. Each day, on returning from her life outside the complex, she joins other women to gather on the grassed area behind their homes to chat and watch their children play within the confines of The Orchard’s fence. The consensus is that children are “fragile, vulnerable and [have]to be watched every minute, every second,” a charge that leaves their mothers with precious little time for anything else. These mothers translate their abstract dangers into the specific: a dangerous house beyond the fence, the dump, and Larry, a “disturbed child.”

These women’s relationships with men are just as consuming: some, like Zora, are single, left by, or the leavers of, men; some are engaged in dangerous illicit relationships; and some are happily married, but struggling with the demands of raising challenging (and challenged) children.
Against this background of threatened danger and muffled conflict, Zora navigates her world as a separated woman and swallows the “’sorrows” that such a separation brings: she worries about Anar and how she might handle a life that lacks a father; she struggles with estrangement and her feelings towards her husband’s new girlfriend; she balances the responsibilities of working woman and mother, and considers the implications of an attraction to a new man in her life, a man who shares her own cultural background and sensibilities…a prospective father for Anar.

CROWD OF SORROWS shifts from an internal examination of imagined fears into every mother’s nightmare, a nightmare in which time slows down, second by stuttering second.
Rachlin hands us a story of a traditional woman cast adrift by questions of destiny: her own and her daughter’s. This is undoubtable a romance. And yet it is also, in part, a thriller. A thrilling romance perhaps. Lovers of both genres, particularly traditionalists, may well find the elements they love inside Rachlin’s latest novella.