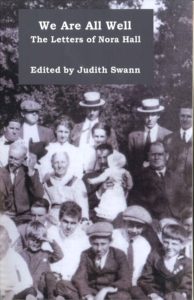 
– Nora Hall lived from 1843 to 1928. There is so much to appreciate in the letters she wrote to her absent son in California from 1909 to 1911. At the time, Nora lives in Port Allegany with her husband who operates a lumber mill. Writing to her son Howard, she conveys in her homespun language how much she misses him. She provides us, her readers of more than a century later, the sense of the rhythm of her days and of what life was like in her local community. But the most important element is the way she conveys her maternal love for her son and the example she wishes to set for him.

Judith Swann, editor of this valuable history, opens with a colorful Introduction to McKean County and life as it existed in Nora’s day. A railroad line connects Port Allegany to Pittsburgh, Philadelphia and cities to the north and south. The little glass mill and lumber town lies just 20 kilometers south of the New York state line. Nora has a telephone, but it is a “party line.” When “Pa” takes a long distance call, he must go in to the town to receive the connection.

Direct rail links end with the decline of lumber, glass manufacturing, and other industries in Port Allegany. Automobiles are arriving but are not yet in frequent use due to the lack of paved roads. As the timber is used up, decline begins, and by 1936 Howard’s father’s mill, now his, succumbs to the Great Depression.

The editor provides a list of those people Nora references in her letters, followed by a list of nearby places. Among Nora’s letters, we find photos, and finally some return letters from Howard. The editor lists her sources, and in footnotes, and elsewhere, we read from primary sources through the editor’s direct contact with surviving members of Nora’s family.

This book is a treasure in so many ways: for its depiction of ordinary life in the early part of twentieth century America in Nora’s region, for Nora’s particular use of language and word spellings, and for her close relationships with her four children and grandchildren. She and her family grew most of the food they ate, kept chickens for eating and for eggs, made their own butter, kept or shared a milk cow traded among the family (for “winter milk”), sewed clothing, and made other household items. Nora herself had a small egg-selling business, for which she might get up to 30 cents per dozen.

In one letter, curious about her son’s love life, Nora writes, “You do not say anything about the girls. I am a fraid (sic) you will see one that will keep you out there. If you can get one to come home with you, it is all right.”

[Howard has gone to California in order to earn money to sustain himself, and to send money home.]

In this letter, Nora acknowledges a monetary gift. “I was glad to get the money, but did not want you to send it for fear you mint need it. I want you to be sure to get what you need and to have some in the bank so if you got sick or out of work you could go some whare (sic) else.”

In a February, 1910 letter, Nora talks about weather, her sister who is ill, and about “Pa’s” work. She writes from a point of homesickness “to see my boy that is so far away.” She explains, “Jim Johnson just came after a boat to get home with. The water is very high, over his rubber boots. A good many on Mill Street cannot walk out on their walks. And one family has moved out, so I heard.”  She continues, “Bertha [Howard’s sister] just phoned. She had a letter from you and a postal for me. If it was not so slippery and icy I would go up tonight and get it…The water is up above the hickory trees on the flat now and it is still thawing.”

Nora went on to say, “Your Pa timed how long it took him to saw a thousand feet of boards and they was only one hour. Is not that doing well?” This is typical of her positive tone, always setting a good example by her and “Pa’s” industry, so that her young son might live this way as well.

Though Swann’s volume presents to us a simple, familial style, there is much of value here for busy parents in our current century. We might well ask ourselves what we have lost and how we might restore important fundamentals in our family relationships, and how we might maintain the most positive attitudes for our children.

We Are All Well: The Letters of Nora Hall
Judith Swann, Editor
Cornell U. Espresso Book Machine
Ithaca, NY (2014)

Carole Mertz has reviewed for World Literature Today, Arc Poetry Magazine, Copperfield Review, The Conium Review, and Christian Communicator. Her Tips on Writing are in Writing after Retirement, Smallwood & Redman-Waldeyer, Eds. Essays are forthcoming in Working Writer and WPWT.