The Best Literary Writing About Mothers and Motherhood
You are at:Home»Reviews»Book Reviews»Original Face by Jim Peterson 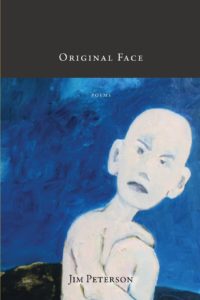 …From her mother dimension /high among the fluorescent lights, she // coached me through the solar system of house, / over thresholds into the galaxy of backyard, / through the gate into the universe of town and beyond. (“The Grip” 88)

Before I launch into a review that shamelessly lauds Jim Peterson’s writing, it is only fair that I disclose how well I know both the man and his poetry. We met in 2001 when I was an undergraduate at Randolph-Macon Woman’s College. I was a “mature student” about to declare as a Political Science major and took Jim’s creative writing class purely out of curiosity. He was the first poet I had ever met, and in less than a month, he opened me to the idea that poetry could illuminate an ordinary life—not only for the poet through the act of writing or for the reader through the act of reading, but also for the people whose lives and moments are caught inside the poem’s lines. I ditched Political Science. Over the next three years, Jim “coached me through the solar system” of writing and helped me “through the gate” as a writer.
It is perhaps this relationship of mentor/mentee that sets “The Grip” as my favorite poem. A man visits his dying mother. She ignores the television to study a clown glove puppet that sits upon the bookcase. Three times this poem returns to the idea of a “grip”: the mother-as-child “reaches into [the puppet’s]body / for the hidden grip” in order to make the puppet dance; the son-as-child steals the puppet from the mother’s bedroom and “find[s]the inner /grip” so that he too might make the clown come alive. In the closing lines, the mother returns to the “here and now” and shifts her gaze to her son who says: “Her dying eyes find my living eyes–/take hold, gently, of the well-worn grip inside.” There is a sense that the dying’s essence (a sorry word for such an important concept) somehow resituates itself—takes hold—within the living.
Peterson has a talent for imagining his characters’ lives so completely that when he brings them to the poem, their (his) sharp insights and truths come too. In “The Map to Her Place,” a man is drawn to a barmaid (15). He is drawn not only by physical charms (“her bare arms / her perfect navel above beltless jeans”) but also by a sense of what a woman knows: “Nothing escapes her, not the swirl / of thumbprints, not even the cupped residue / of voices on spoons.” This poem considers the tension created by man’s need for woman as sexual partner and man’s need for woman (often the same woman) as mother. The man sleeps at the barmaid’s home and wakes with two questions: “How did she know he would lie all night / on her couch bathed in the TV’s pale light? / How did she know he would sleep like a child?” One gets the impression that Peterson knows the answers to these questions, that he would be unable to write these poems if he did not.
The tense and sometimes difficult male/female/parent/child space is revisited again and again. In “The Captain,” a wife and husband navigate the tricky terrain of what turns one on and the other off, a space made even more treacherous as the final stanza surveys a father’s function in this erotic landscape (20). In “Winchester,” a mother looks back on her role in her son’s life (“When he was eight, he was still mine.”) and on her husband’s (“When he was twelve, he did not need / a mother to teach him to break the gun down / and put it back together again”) (29). In this poem’s conclusion, it is hard not to see the mother as discarded and the father as destroyer.
Not all of the poems in ORIGINAL FACE deal directly with mothers and motherhood, but all deal with the human condition, one that relies on the interaction of men and women. As in life, these interactions are often positive and heartening, but sometimes they are not. But whatever form these interactions take, Peterson delivers their truth and impact with absolute clarity, knowingness, and grace.

Bunny Goodjohn, originally from the UK, lives in Lynchburg, Virginia. She is the Book Review Associate Editor at Mom Egg Review, teaches and directs the Writing Program at Randolph College, and is the author of two novels (STICKLEBACK AND SNOW GLOBES and THE BEGINNING THINGS). Her first poetry collection, BONE SONG, was published in May 2015. www.bagoodjohn.com