The Best Literary Writing About Mothers and Motherhood
You are at:Home»Reviews»Book Reviews»Hinge by Emily Wolahan 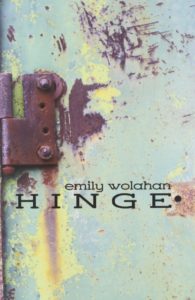 Some poetry begs to be understood; some challenges the reader to understand. Then there’s the poetry that doesn’t ask us for anything; it seems complete in itself, regardless of what we understand. In general, Emily Wolahan’s Hinge fits into the latter category. Understanding is an open question and an important one, recurring throughout the book, but Wolahan knows better than to make things clear when they aren’t. Her poems aren’t the prosaic kind that tell vivid stories or create defined characters; even the images can be elusive, and moments of jumbled grammar can leave the reader stumbling. Sure enough, when I think of the book a few weeks after reading, I think of fog: the fog in the first poem, which hangs over a shore where the mother of a frustrated, inarticulate child might walk into the water and drown herself to be rid of her own inarticulate frustrations.

Many of these poems take place somewhere along the water, and by the time I reached the penultimate selection, “Sheerness as Seen From the Nore,” I felt like the poet’s artistic mission was summed up in the lines, “We are filled upon acquaintance / with light as it is acquainted with water / ship, bird, land.” As Wolahan goes to ask her questions in the liminal space between sea and land, so she invites us to stand there with her, even if there are no answers. Thus she begins the poem, “Instead, water laps a low wall. // A dock crane’s long yellow arm / dipping slowly, / it’s afterimage arresting the sun.” And so we watch, arrested, too, but not pretending to know what there might have been in place of this scene, what any of us might have had instead.

Wolahan uses language with economical creativity, and her poems—mostly quite short—can feel at once heavy with import and very lightly written. Place matters immensely for the speaker, but place is a heavy thing. In “Everything Within,” eleven brief lines gesture quietly toward the dark side of rootedness:

That distant dissipating wisp of smoke.
The dank purple of broken-up soil.

Happily stupid. Each to the other
what the other loves.

Each destroying the other’s appetite.

“Vacant” follows directly after, elaborating on the same theme, but the implications of embracing a place feel even darker now. Rather than face a difficult history or anything that feels “fathoms apart from our land, / our population,” she writes, “Better find // a hollow tree and, upside down, / compose a staircase of gratitude. // What I meant when I said I’ll stay here forever.” Even so, her writing is at its best anchored in the concrete details of a distinctive, recognizable world. “Motor By,” which feels akin to the pair discussed above, is a beautiful outpouring in which the traveler, looking to cure her low spirits with “sunset, castle, tidal bank” ends up focused on the dowdy farm with its “slightly tawdry / hedge, the washing line, a broken-down car.” There is no salvation in escape; the things of this far-away homestead on the moor only leave the speaker with her companion to cling to: “Nothing here wants us, / knows what to say, nor begins by asking.”

The speaker—and the reader with her—is repeatedly thrown back on herself by the world to which she looks for something more than herself. Again and again, we wonder where we ought to be. “Argument in Optative” describes a city scene—a half-constructed building, the sky behind it, the train rising up over a bridge—and the upshot of so much attentive watching is only this: “It’s not that I’m unsure. It’s something else.” Whatever the place and the poem contain, it isn’t quite right. “The Harbor Arts,” a series of pieces that feel especially controlled and philosophical, touches similar ground—once again via the sea: “Your stint as a sailor will grow into love / unsparing and silent, the equal of the sun / inside your room, / an expensive thing. // Can you? Can I? To this place?” Yet Wolahan lets the hinge swing the other way, too, occasionally opening a door to a moment without anxiety. My favorite poem, “Exuant,” is not a question, but a lovely, airy observation of winter tinged with the warm promise of “an overgrown soft wood yet to flower yellow.”

Wolahan’s poems call for immersion more than plain understanding, and I think it’s no coincidence that I felt my way through them more easily while soaking in a bath. Her work rewards rereading, as it feels much rewritten, with all the extra words revised away. Her language may be simple, but it’s surrounded by all of the empty space of real uncertainty. What might fill all of that space, what might connect the images, the statements, the unexpectedly adjacent words, is left to us to imagine—or not, if feeling is enough.

Libby Maxey has a Masters degree in Medieval Studies and works as a freelance editor. She is part of the staff at the online journal Literary Mama, which has also published her poetry. Other work has appeared in Mom Egg Review, Brain of Forgetting and Off the Coast.