The Best Literary Writing About Mothers and Motherhood
You are at:Home»Reviews»Book Reviews»Where the Meadowlark Sings by Ellaraine Lockie 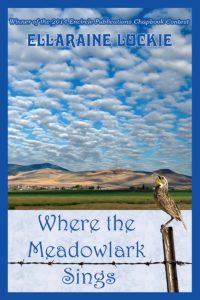 – As a native New Englander very tied to her roots, I deeply appreciate the voice of this collection of poems. Not only do they paint a vivid picture of Big Sky country, where I have visited in awe of its spaciousness and grandeur. They also portray an intimate portrait of lives lived big and bold as the space they occupy. The spaces they open and weave on the page are a testament to the author’s own rooted histories, and more. Lockie writes with a fluid grace, her language as rich and varied and layered as the inner and outer landscapes she unearths.

Lockie places herself in the lineage of Montanans by virtue of her powers of observation, familiarity with her heritage, and her own unique sensibilities. The scope of her topics is as sweeping as the endless prairie and as particular as the mouse skeleton in the cabin wall. She brings the reader with her into memory and leaves us rich with details of home, its soil still clinging to the roots. The balance of her particular compassion and practiced compression of fact render her poems entirely accessible, regardless of the reader’s lived experience or background. At the same time, she manages to place the present alongside this past with a yearning that is far from maudlin. It, simply, is.

With the simplest turn of phrase she tells a world of story. Take the first poem, “Abandoned Garden.” It opens, ‘Lying on the long side of time …’ eloquently setting the stage for something ancient, potentially forgotten; and yet, ‘she lingers in these immigrant flowers…’, ‘lives in the flames of poppies she planted…’, ‘lives in the pressed purple yellow pansies that look out from a grandmother’s diary… as they take flight …’ Like a true gardener, the author pollinates the poem with specific flowers one can see, smell, touch through their release from the page.

In a similar tribute, this to her grandfather, “Late Harvest” creates a snapshot of the hidden ways in which men found companionship with one another over morning coffee (‘it wouldn’t be manly to need comraderie’) while playing on the late season of a man’s life lived in the ethics of hard work. So much said in these final few lines: ‘ . . . carrying … an expired driver’s license/and a can of oil to bribe the joints/ of an old combine into one more season.’ His included.

I would be remiss not to mention the intensity of Lockie’s imagery. Line after line begs to be acknowledged, celebrated, remembered: ‘thunder in the throat of distance;’ ‘purple lilacs shadow the surrounding peace;’ ‘even wheat bursting from its beards/has to learn to wait;’ ‘cottonwood trees slant in cursive;’ ‘feral funneling through your fingers;’ ‘narrated by waves of wind;’ ‘where fragments of facts atrophy into fiction;’ ‘for blood knowledge to seep through soil;’ ‘the messiness of closure/is what cancels nightmares.’

“If Women Ran the World” details the loving intention with which the author’s mother fed those in need, like her mother before her; the author today follows the same practice of consideration. It is a wonderful practice of kindness and other-focus in a world that has become so centered on the what’s-in-it-for-me mentality. Again, simply stated; it was, simply, what she learned from the example of her early rural upbringing. A similar theme informs “A Matter of Degree,” where the communal tradition of mutual assistance is turned on its head. Moving from the ‘endless prairie’ to ‘another kind of vastness in a city’ she learns ‘the only way to cope is to move further/and further away from the edge of community/one degree at a time toward the center of self.’ What a biting commentary on the modern city way of life. And how, sadly, true.

Perhaps my favorite poem – and I say this guardedly, as increased complexity emerges from the apparent clarity with repeated readings of each piece in the collection – is “After Montana.” This poem is blushingly sensual, a physical love affair between the author and the land from which she hails. It would not do justice to quote it in part; you must get hold of a copy of Where the Meadowlark Sings and read it through for yourself. More than once.

An experienced writing coach, facilitator, change agent and mediator, Sarah W. Bartlett has, for two decades, midwifed the stories that evoke and celebrate voice among women. Whether battered women, cancer survivors, adolescent girls, or the incarcerated, each community practices the philosophy and intentionality of Women Writing VT. In January 2010, she co-founded writing inside VT, where truth-telling in a judgment–free setting encourages incarcerated women to reflect on and change life choices through writing.