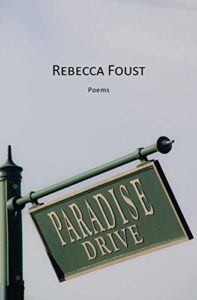 – This Side of Paradise
“Best party in years!” quips the guest, as she departs, having spent the evening in her hosts’ luxurious guest bathroom reading The Cantos, stowed in her purse for just such occasions. Here is the kind of congratulatory, hypocritical cocktail party retort from which she hopes Ezra Pound will provide escape:

“No, I don’t think I’m better than you
because I’m wearing these Birkenstocks
made from recycled rubber. I like
how clogs look and don’t object to a shoe
made from a near-extinct lizard, flayed
while still alive.”
[“Pride, Bickering with Vanity”]

The quotation marks of this mild ridicule protect Foust and her new book, Paradise Drive, winner of the 2015 Press 53 Award for Poetry, from a libel suit. Foust’s targets flay themselves just by opening their mouths. Viewers of the Colbert Report on Comedy Central will be familiar with Foust’s satiric technique here, taking a statement of modesty—“No, I don’t think I’m better than you”––to its logical, and absurd, conclusion.

Nor is vanity the only vice, folly, or shortcoming Foust skewers with her wit: envy, ambition, anger, poor taste in clothes, and general insensitivity to the suffering of others, particularly children, are also her targets. She is particularly adept in her social criticism of gross materialism. Even pets are wound up to parody the hypocrisy and materialism of their owners, as in “You Well May Arf,” a title with the playful punning on arf / barf characteristic of good satirists like Foust:

Some have, shall we say, more than enough,
viz., that pompadoured poodle francaise
chauffeured in her very own chaise
ball-hitched to a bike. WTF?
you well may arf, but wait: my friend Prince
the Great Dane gets Rolfed once a week,
and a Shih Tzu I know, an herbal shampoo.

All this in a world where, as the poet puts it, “isn’t it also elite– just––to eat?”

Pilgrim (Foust’s epigram for the narrator) strives to rise above the pride, greed, gluttony––and despair––of the people around her, in part by recalling the bedrock values of her own poor, white upbringing in Pennsylvania mining country, revealed in the punning poems “Indentured” and “The Prime Mover” (the patriarch who loses his mortgage). In the latter poem, a hard-working mother, diligent about her children’s habits, insists they must brush their teeth and floss every day, though

floss got reused, rinsed, and pinned
to the clothesline.

Her mother’s values, fostering dignity, self-restraint and hard work are tested when, as Pilgrim tells us in “California Dreaming,” she moves to the West, to a semi-desert landscape––
lit, and loaded

with cord-stack: the family tree felled by blood,
smoke, and gin. In that first year of dead
and no weather, I wanted winter, trees
with no leaves, any word spoken in tongues.

Pilgrim thrives in her new environment––Marin Country across the Golden Gate Bridge from San Francisco––beautiful country extoled by Foust in an eponymous, poem-prologue in which Mount Tam stands “mantled / each dawn in fog, then naked and lit / from within. Winter sunsets, the sky / a wound, the sky vivid and gashed; / each day bound to the last with dark thread.

Pilgrim seeks genuine and compassionate connection with others of her species; she goes to parties, makes friends, sends her children to school, and gets to know other parents. Life may not be perfect, but like Sophie Tucker, Pilgrim has been rich and she’s been poor, and she knows “rich is better.” As she writes—

Everything was plu-perfect, gosh-darn-it,
till Pilgrim’s kid got tagged autistic

Pilgrim’s life unravels when her son is mercilessly teased in school––
razzed every day, maybe twice:
“Got Ritalin?” And about what brick does,
on contact, to a child’s perfect face.

What’s more, the parties required by the life style, the paradise where hard physical labor and insolvency are practically nonexistent, are dull beyond bearing. She develops a taste for alcohol, she engages in retail therapy, she even considers suicide––followed by therapy, recovery and salvation in the form of literary and intellectual pursuits. Recalling the Protestant ethic and hardscrabble life she knew as a child, Pilgrim asks, “How Then Shall We Live?” and responds:

[“The Prime Mover”]
She knows “flaunting your wealth is in poor taste,” as she tells her children.

This is also the Pacific Rim where cities are populated as much by the descendants of Asians as Europeans, and where the Japanese aesthetic of imperfection becomes part of the culture. Though mocking the Swedish accent of her neighbor who pronounces “Asperger’s” as “asparagus,” and the PTA mom who hears “autistic” as “artistic,” in the poem “Elocution,” Pilgrim professes to like best those flawed people who have

suffered the way anyone can suffer:
kids lost to cancer, cults, or drugs; dumped
for younger or richer. The ones not offered
the A-list e-vite––a bummer when a guest
gets too drunk and sobs in to the buffet––

[“The Ones Pilgrim Likes Best”]

Oh what’s the use in tinkering, dialing
in each word, memory for desire
so the reader can share the feeling
without feeling lectured? Does the fire
care what phrase names its fierce thirst
or on which beat I break the line?

Foust tends to reserve her punch-line couplets for the final lines. As Foust herself admits, “You could say I sonneteer like some sail: / on weekends, in fair weather, ever inside/ the curve of a warm, shallow bay.” Foust keeps her rhythm and meter loose; rhymes tend to fall in the final couplet of the sonnet: “my tailor whose job depends on this tux: / Brioni bespoke, and better than sex.” As here (tux/ sex), Foust makes good use of slant rhymes: coke /book; Times / balms; fete / feet (all from “Cocktail Party”). She often uses internal rhymes in place of end rhymes:

“From the dolor
of hours stung numb, a sermon
of grace is sung. But a tongue never tires
of honey left wild to steep in the comb.”

(Italics mine)
[“Gluttony, Having an Antiphony”]

While not sacrificing the rhythms of natural speech for rhyme or meter, and while using rhyme to skillfully reinforce meaning or underline paradox, Foust seldom compresses her lines enough to be epigrammatic.

In the heady milieu of cocktails and lavish décor the poet’s need for privacy emerges, inspiring an original and delightful sequence of “bathroom poems”, composed in the lavish bathrooms that offer protection from busybodies at the parties her life style requires she attend. In the bathroom, Pilgrim discovers Era Pound and Archimedes.

[“Another Party, Another Bathroom”]

This reader can say that––Give us more!–– about this poet, these poems.

Does technique undermine the proclaimed ideals of originality and power? If one thinks of exuberant free verse as having a certain flavor, and formal verse a different flavor, Paradise Drive takes flavors from both menus and presses the techniques of classical poetry into service on behalf of creative, energetic, and witty sonnets, or what Susan Stewart, in The Poet’s Freedom, might call semisonnets.

Zara Raab’s latest book is Fracas & Asylum. Earlier books are Swimming the Eel and The Book of Gretel, narrative poems of the remote parts of Northern California set in a mythical time. Her work, including reviews and essays, as well as poems, has appeared in Mezzo Cammin, Verse Daily, River Styx, West Branch, Arts & Letters, Crab Orchard Review, Critical Flame, Raven Chronicles, and The Dark Horse. Rumpelstiltskin, or What’s in a Name? was a finalist for the Dana Award. She lives in western Massachusetts.