The Best Literary Writing About Mothers and Motherhood
You are at:Home»Reviews»Book Reviews»November Butterfly by Tania Pryputniewicz 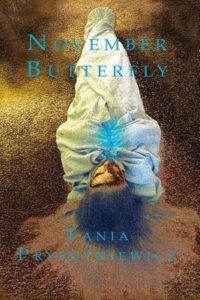 – It is not lost on me that I was assigned to review November Butterfly as though the universe were contacting me through any means possible as I contemplate my own role as daughter, sister, wife, and mother—the very elements that shape this fabulous collection of poems that celebrates the female in all her guises, and the elements that are currently permeating the world of women in contemporary society. There is something so tender in the way that humans reveal and revere the experiences that have shaped who they are and who they will become. This is the essence of November Butterfly.

In this lush exploration, Pryputniewicz observes the lives of numerous iconic women—women who navigate the world with impeccable courage and daring. It is through these observations that the speaker reveals her own struggles, as though she were dancing with the looking glass. Clearly, this work of magnitude invites the reader to participate in the oft-resisted practice of inner retrospection.

The book is divided into three distinct sections. The first addresses numerous female figures who have played an important part in history, folktale, and folklore. In the second section, Pryputniewicz tackles a mythological visionary. And in the final section, she navigates the voice of a woman who stands on the precipice of re-envisioning her role as a victim of rape.

The women featured in the collection all operate under established gender expectations but flourish despite the challenges placed upon them. They relish the freedom of being who they are and of being

no bigger than a bumble bee, able to get
as much lift from down-beat

as up, unaware of danger:

These women frequent the depths of their intuition and their ability to relate to the world not how they are expected to, but through their own power. Although many of the poems appear to contain speakers who are apologetic for their lives, there is an undercurrent of strength and self-willingness. It is made clear in “The Corridor” that “power has many homes.” While power may appear to be given through titles and manhood, there is the inner sanctum of strength that undergirds the female—the female who must learn to tactfully navigate the world under a different set of conditions and who creatively does so.

November Butterfly reaches it apogee in the final section of the book. While the first two sections clearly explore women who are mostly well-known to a general population, it is as though they exist only to reconnoiter the truth that is shared in this last set of poems. “Someone” brilliantly sets the tone for this section with its speaker’s insistence that someone “visits my body by night./ In a parallel world of dream.” Clearly, there is an inference here of a visitor who is welcomed rather than unwelcome. The speaker exists, or wishes to exist, in a dream rather than to recall the tragedy that has transpired.

The title poem is a beautiful pronouncement to the world through the wishes of a speaker who ponders the beauty amidst this tragedy. The imagery in this piece electrifies the speaker’s world in composition, in comparison, and in contrast. We are met first with the idea that “[i]t’s easy to love the sun.” The sun is bright and shiny and represents a warmth that seems to be missing for the speaker. There is a contrast in the “blood cardinals/ flying over snow,” almost, if not truly, a statement of how a bloodied or tragic experience can disturb an otherwise virginal life.

The speaker in “November Butterfly” could simply be a dejected person, full of the tragedy that has befallen her. However, she prefers to exist in a parallel world that is accepting and that offers possibility despite the distraction placed upon her life. Despite the outward appearance that she might be damaged because of her sex and the damage done to her because of her sex, she refuses to kowtow to this negativity, instead preferring to “look you/ in the unblinking amber screen/ of your eye.” She sees the amber glow of the sun in the self—the warmth of what is possible.

Pryputniewicz establishes herself as a major voice in support of women and of the poetic exemplar. November Butterfly is a powerful collection and its success is found, first, in the strength of the women who have risen from tragedy and, second, from the exquisite beauty of its images and allusions. It is a must-include as an exemplar of poetry and gender studies.

Anne Marie Fowler’s creative work has been published nationally and internationally. She has also contributed to several encyclopedias on literature and sex workers. Currently, Anne Marie teaches composition, research, literature, creative writing and mythology, and is working on mastering jewelry making, creating mixed media art that speaks to the creative spirit, and finalizing a book of poetry.