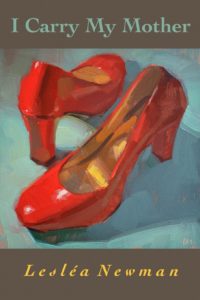 – I Carry My Mother is dedicated:

In this collection of poems, Lesléa Newman explores a journey to loss. Each of the five sections, reflects a part of this process of losing and grieving a parent: “Prologue: Preparing to Depart”, “Part One: Stoic As a Stone”, “Part Two: Alive and Not Alive”, “Part Three: Quiet as a Grave”, and “Epilogue: Wherever I Go”. The journey moves from harsh illness to painful death, to her grief in the immediate aftermath, through ritual and funeral, and at last to the first year anniversary of her mother’s death.

The collection opens with the poem “Safe Passage”, which begins:

My mother is preparing
to depart and will soon set sail
without me.

In this poem, as in several of the others, emotion is kept at arms length. A potentially intense scene is muted, echoing the way grief can numb the person experiencing it. Though some of the later poems confront the reader with profanity and intentionally jarring images, “Safe Passage” understates, ending with:

It is the perfect entry to a daughter’s grief. The poems dance around, examining her mother’s life, illness, and death from different angles. Shifting back and forth in time and memory, the poems illuminate for us, little by little, how the mother is echoed in the daughter, and how this loss is felt.

The first section consists of a single poem, “The Deal”, broken up into 15 pages, each containing a single stanza. The physical distance between stanzas slows the process of reading, isolating images in snapshot moments, forcing us to take each one alone. The structure of the stanzas reinforces this:

Here, repetition serves as a tool for pinpointing snapshot moments, slowly building a bleak picture of a daughter losing her mother by inches. The dying weighs down her father; her mother forbids her to cry; her bloated mother begins losing weight; her mother hides her fear and pain; her mother suffers indignities in the hospital; her mother passes. Each of these is isolated, but the poem as a whole conveys to us the passage of months.

Interspersed among the poems in the second and third sections are poems that borrow the structure of other famous poems. In some cases, as in “Thirteen Ways of Looking At My Mother”, the format seems entirely appropriate to the subject matter. In others, the structure jars us, as in “Pills”:

but this juxtaposition is actually very effective: the familiarity of the form used highlights the subject matter, rather than minimising it. In “Thirteen Ways of Looking At My Mother”:

and in “My Mother Has My Heart”:

My heart in her a newborn mourning dove,
Still safely tucked inside its sheltered nest.
Her heart in me a letter signed with love,
A treasure I keep deep within my chest.
My mother has my heart and I have hers,
We traded on the day that she gave birth.

the focus is on the grief and the family connections. More than once she references parts of her mother that live on in her, as well as the Jewish rituals for death and burial. A sense of collective loss appears in “Sitting Shiva”:

Where’s the coffee pot?
I ask my father, who knows
my mother would know

but in the end, she reminds us that her grief is personal, in “I Carry My Mother”:

Her deep set brown eyes that at times appeared black
Her milky white skin when called this side of snow
I stare at the mirror, my mother stares back
I carry my mother wherever I go

Each poem in the collection serves as a personal memorial to the mother in the dedication, a testament to the love felt by a daughter for her mother. It honours the grief felt, stirring the reader to heartfelt tears, and is a fitting epitaph to a clearly beloved soul.

I Carry My Mother by Lesléa Newman
Headmistress Press, 2015

Tessara Dudley is a poet, educator, and activist. Her writing can be found online at Black Girl Dangerous, and The Prospect. She is preparing to go into publishing, with a forthcoming book of poems, Fallen/Forever Rising, and she blogs at http://tessaradudley.com