The Best Literary Writing About Mothers and Motherhood
You are at:Home»Reviews»Book Reviews»Grass Whistle by Amy Dryansky 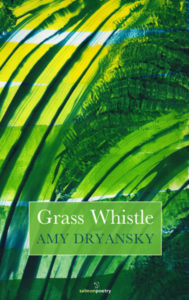 – I may not be the best person to equate marriage to a sonnet, but I feel it nonetheless, in Amy Dryansky’s generous and lovely book, Grass Whistle. The speaker is rooted in a traditional family and a long marriage, with many references to children and a husband. This isn’t a volume of formal poems but Dryansky stays within the sonnet-like emotional structure of her persona as wife/mother/daughter. Within it she soars with the freedom afforded to accomplished poets. The speaker dutifully does what is prescribed by her traditional roles but the poems aren’t circumscribed. This poet knows about control, and letting go—sometimes paradoxically the same.

Being superstitious, I can’t imagine including the words “happy or “happiness” in one of my own poems, but Amy Dryansky is courageously open to it. She has grace, clarity, and the desire to connect, as “Happy as I Believe Myself to Be” opens:

Three days I was all yes, seeing only luscious,
early summer light. For three days
grateful, pompous even, I idled
in my blowsy garden rampant
with vetch, forget –me-not, trumpet vine
springing forth from the head of a split pin oak
in crazy, vegetative fireworks.

Beautiful musical language and lushness create an experience for a reader, a kind of delight and pleasure, which in some circles, is a variant of happiness. The last three stanzas of “Another Poem About Happiness”, which feels like it rose successfully from a journal entry:

Seeing things as they are,
she says, that’s a kind of love,
and for a moment something

hand raised in a friendly way—
the flag of this day
not promised, but given.

The emotional reach of Grass Whistle goes well beyond happiness and playfulness. The extraordinary “Scenes From the Life of the Virgin” takes elements from ordinary middle- class motherhood and demonstrates how breakable they truly are as they shatter into deadly shards. The poem grapples with the post-partum psychosis of Andrea Yates, the mother who drowned her five children, not without illuminating the common if not universal terror we mothers have of being “bad.”

You can feel the poet veer out of her comfort zone in “Self-Portrait of Someone Who’s Not Me”, in the longest poem in the volume, without stanza breaks. It has small tight stitches, in the form of questions. The question marks look like hook-and-eyes. The stitches get unstitched, by the speaker’s self-questioning.

As I was reading “ Soul Accounting”, I was marveling at how Dryansky captured Emily Dickinson’s tone if not thoughts—and when I read the notes in the back of the book, I discovered that it is indeed a cento, composed of first lines of Dickinson’s poems. It is a pleasure to read, and an opportunity to admire Dryansky’s considerable skill.

In her poems about her children, there’s no need to fret about risk or exposure. Her poetic voice is strong, honest and direct about motherhood. There is intimacy; there is wisdom. In “May I Continue” she writes about her daughter’s bewildering attachment:

All that work to get her out and now
she’s desperate, it seems,
to plant herself in me. She digs in
beneath my ribs so hard

I have to tell her to stop, I’m not
always nice, but I try,
I peel her off and steady her, steer her, direct
my hand in the small of her back
even as I am unmoored, drifting, bumping
into my own non-existence, not yet
death but a foretaste.

A child’s attachment that manifests itself as a fear of losing her mother, as the poet herself faces her own “non-existence” is deeply explored. In “Turning” we witness a beautifully moving interaction with the speaker’s son about death on the occasion of a lost cat. These two poems are gently instructive.

When you get close to these poems, you see their tree-like structure. They have been planted; they’re not sprouting wildly through the cracks and crevices of a troubled landscape. As you step closer to these poems you will not stumble on rocks or roots, because they extend deep underground. You feel their vibrations. Deep roots, deep feeling.