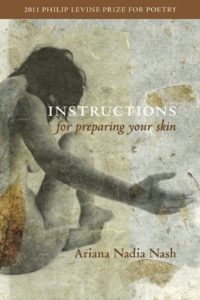 – In her debut poetry collection, Instructions for Preparing Your Skin, Ariana Nadia Nash unabashedly reveals how deeply personal experiences forever mark our bodies. The poems are honest and courageous; Nash makes wounds feel like badges of courage. Instructions for Preparing Your Skin was selected by Denise Duhamel as the winner of the 2011 Philip Levine Prize for Poetry. The book is divided into five sections, across which Nash takes the reader on interstate and international journeys in the quest for love, home, and, of course, the protection that comes from feeling comfortable in one’s skin.

Place is important to Nash. In the poem, “The Continuity of I-95,” the reader is driving with Nash north on the interstate. She begins in Miami drinking over her dying grandmother, then becomes one of the girls baking pies in Virginia, stops to listen to poetry in Manhattan, and in New England, enjoys eating snow sweetened with maple syrup. At the end, Nash is on the Carolina coast, where this poem proves to be more than a showing of landscape; it reveals Nash’s tone, “but now I never choose that / interstate away from / ocean and mild weather — / the way you pass any road back: / glancing, but still driving straight.” Here, Nash shows her inner-strength; she may be shaped by the rocky roads she has traveled, but that does not mean she has to cling to them. In these poems, Nash is always moving forward.

Details become more intimate as the reader crosses oceans with Nash. Like in “The Surgeon Told Me I Giggled the Whole Way Through,” set in Prague, where she admits to jiggling her breasts and finding a lump in one of them, or in “Autonomy,” where in Thailand, she rushes across twelve lanes of traffic with her eyes closed. It is also in “Autonomy” that Nash feels “unpressed to the world,” and later writes, “after so many cities I am shocked I still struggle to navigate, / but there is no map to tell me where I can stay.” The loneliness that accompanies uncertainty can surely make life unbearable. It is no surprise, then, that in the title poem, “Instructions for Preparing Your Skin,” Nash writes about a list of experiences that suggests one needs to lose her inhibitions to develop thick skin.

Fall in love. Fall in love so you are willing to peel back your skin and   leave your-
self achingly bare. And, as you spill out yourself, be entered for the first
time, clinging to his uncalloused skin as if it could make you whole.

Nash does not deter her readers from facing hurt and shame, and in fact, encourages vulnerability. The poem finishes with the suggestion that being physically and emotionally malleable prepares one for anything:

Now weave your skin tighter until you become a tapestry in red clay and
sand — solid and permeable earth . . . And wait, like
the fallow ground does for a change in the course of the river — that slow
erosion and sudden penetrating flood.

In addition to self-contemplation, Nash employs the persona of the biblical Delilah to explore love in a series of epistle drafts. She also writes a set of poems, “Symphonie Fantastique,” sectioned as movements from a symphony. In the first of this set, 4th movement. Marche au supplice, a woman is beheaded for murdering her lover. The proceeding movements explain this woman’s suffering, “She was daunted by his presence. / He could pluck her like / the strings of a cello — deep, reverberating joy.” In relating the woman to a cello, we understand that while she was captivated by love, she became inanimate or paralyzed by it.

Although the subject matter in this collection is complicated, it is easy to appreciate Nash’s craft and voice. Her work is revealing, yet not typically confessional. Unlike other confessional works, Nash uses her poems to think about the connection between body and experience. Although we cannot recapture certain feelings of love, Nash believes that we should not deny how these feelings imprint our bodies.

Teresa Narey’s work has appeared in Apeiron Review, elimae, Wheelhouse Magazine, Blind Faith // Poems by Women in Dayton, and The Monongahela Review, among others. She is a recipient of an Academy of American Poets University Prize and has a Master of Fine Arts in Creative Writing from Chatham University.